CardSpring, an ambitious payments startup founded by former Netscape engineers, is building a platform that connects web and mobile applications to payment cards. It’s a card-linked payment infrastructure that can work across any bank or card type (Visa, MasterCard, Discover, AmEx, etc.), because it sits in the cloud, and is attached to the payments network directly. This enables developers to build card-linked applications that trigger when a consumer pays by credit or debit card, whether it’s an app delivering coupons, offers, loyalty points, frequent flier miles, recommendations, or more.

Now, the startup is taking a big step in terms of making this all happen, as it has partnered with the First Data payments network, the largest payment processor in the U.S., reaching over 4 million merchant locations, and accounting for over half of the U.S.’s payment infrastructure. Also new, CardSpring has added a handful of big-name strategic investors who cover every aspect of its business: API franchises, online advertising, big data, and finance.

The new investors are Jeff Hammerbacher, the Chief Scientist at Cloudera, and who led the Data team at Facebook; former Yahoo exec now LinkedIn CEO Jeff Weiner; Founding Partner at Ignition Brad Silverberg; and Chairman of the Board and former CEO of Intuit Bill Campbell. All these investors, and some who are undisclosed, joined after CardSpring’s $10 million Series A announced in January.

Silverberg, who spent nearly a decade at Microsoft leading development of the Windows Platform, Internet Explorer, Office and MS-DOS, has known CardSpring CEO Eckart Walther for years, competing with him while Walther was at Netscape and he ran Microsoft’s Internet efforts, and later working together on Microsoft acquisition Tellme where Walther led product development before moving on to Yahoo and LiveOps. He describes Walther as “an unbelievably brilliant technologist, one of the deepest platform thinkers I’ve ever worked with.” Silverberg admits that he basically nagged Walther until he agreed to let him participate in the A round.

“When he told me what he was working on, it was like lightning bolt of clarity…it seems so obvious that something like this should be done, I was stunned that no one else had done it before,” says Silverberg of hearing about CardSpring for the first time. “The market need for CardSpring is huge.”

The payments space is seemingly a tricky one to gain traction in at present. There are so many startups begging for attention, with consumer-facing mobile wallets, mobile payments startups, mobile coupons, daily deals, local offers, loyalty platforms, card-linked merchant platforms, and more, all jostling for position. But this fragmentation is actually an opportunity for something like CardSpring to come in over top and provide a platform for unification. And by partnering with First Data and other payment networks (this deal is the first of many), it allows CardSpring to grow its reach, while also all enabling all this innovation to grow around them. 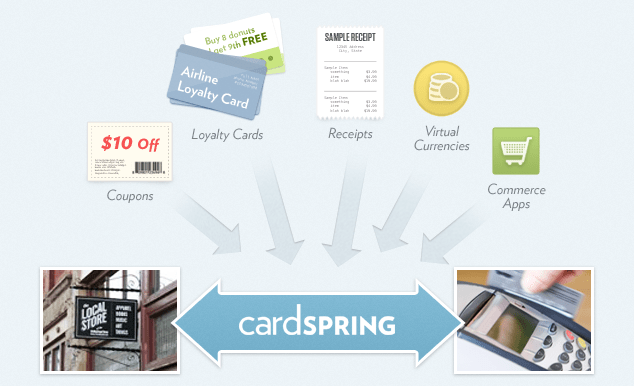 The way CardSpring works is that any payment event (a swipe, an NFC tap, Square’s “say your name at checkout,” etc.) could trigger an event to occur. This event could be anything from being sent a coupon for a future purchase to having a receipt sent out via email to checking you in on a social network and a lot more. The credit card, in this way, acts something like an application – with control over the associated permissions in the hands of the user. This one can email me, this one can post to Facebook, this one can deposit cash back into my bank account, etc.

In merchant speak, CardSpring could also enable apps that “close the redemption loop,” which means it connects an offer (deal, discount, coupon, etc.) to a transaction at the point-of-sale, whether that offer first appeared on web or mobile. However, CardSpring itself – unlike card-linked competitors edo and Cartera – is not a merchant-facing platform. It’s infrastructure. What Twilio is to voice, or Stripe is to e-commerce, for example.

And because it’s critical that a service tied so closely to the payments network itself is secure, it’s notable that CardSpring’s CTO Jeff Winner was head of crypto at Netscape, and came up with things like SSL. You don’t want rogue apps when you’re building a platform like this.

The company already has $10 million in funding from Accel, Greylock, SV Angel, Morado Ventures, Felicis Ventures, and Maynard Webb’s investment arm, WIN. It can now add the strategic investors above to that already impressive lineup. With its funding in tow, CardSpring is now quickly moving towards its launch. There are hundreds of companies already participating in its private beta, including Boutiika, Cardify, Choicepass, FanPlayr, Giftly, ifeelgoods, Key Ring, Local Bonus, Mirth, ParkMe, Place Points,Roximity, Savored, Scout Mob, Tello and Toodalu, to name a few. Around 20 companies have quietly gone live already, and there are more in the works. CardSpring expects to exit private beta this year.