There’s been quite a little buzz building around FreedomPop thanks to its ambitious plans to provide freemium wireless Internet to everyone in the United States, not to mention its peculiar 4G-friendly iPhone cases.

As it turns out, that’s not all that the Niklas Zennstrom-backed company has been working on behind closed doors. FreedomPop has just announced that it plans to release another 4G-capable case — this time meant for use with the iPod Touch — and has already begun taking pre-orders for the $99 gadget.

“We’ve had thousands of inquiries,” FreedomPop marketing VP Tony Miller told me. “[The iPod case] was further down on the roadmap, but we had to push it up.”

Like the iPhone case (the “Freedom Sleeve”) before it, the 4G iPod Touch case is basically a WiMax mobile hotspot that’s been designed to wrap around a device instead of sit next to it. Your mileage with the thing is going to vary considering WiMax’s limited footprint, but the company plans to release an updated model compatible with Sprint’s new LTE network in due time. For now though, interested users are going to be in for a bit of a wait — Miller says that the iPod case should be in the wild within “two months at the latest” as actual production of the device hasn’t yet begun.

That said, the company’s marketing machine has already kicked into high gear — the company has said that the new case effectively turns an iPod into an iPhone. It’s a juicy message for sure, not one that’s true right out of the gate as users will have to get set up with a VoIP service like Skype to make the phone bit a reality. FreedomPop has cryptically hinted that the ability to make voice calls may soon be folded into its wireless service though, so that statement may ring truer down the line. 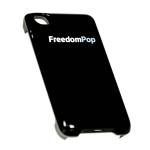 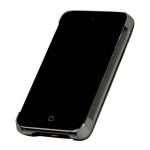 If this iPod case concept sounds eerily familiar, it’s because Sprint essentially did the exact same thing about two years ago with the ZTE-made Peel. Well before Sprint finagled a deal to sell the iPhone, interested consumers could pick one up and shell out $29.99/month for 1GB of 3G data. Despite the obvious similarities — I’m told that ZTE may be on deck to produce FreedomPop’s iPod case — Miller claims that no one on the team had heard of the Peel until they began doing research into the feasibility of such a product.

FreedomPop’s twist on the device (if you haven’t yet heard) on the other hand grants users 500MB of free monthly Internet access, as well as some bonuses for playing nice with others. As I’ve mentioned before, FreedomPop is really trying to play up the social component of its freemium Internet service — users can share portions of their data allotments with each other, and can score an additional 10MB for each new user they refer to the service.

Miller also let slip a few details on the sorts of rates the company will offer for users who need more than 500MB/month. Those in need of just a little more bandwidth per month can pay the normal $10 for each additional gigabyte, but the company also plans to offer low-cost data plans for really heavy users. Miller wouldn’t break down the tiers specifically (mostly because the company hasn’t quite ironed them all out yet), but revealed that the company plans to run with an aggressive pricing model — FreedomPop’s data plans are said to cost between 20% and 50% less than similar data buckets from major carriers. Take the near-standard $50 for 5GB bucket for example: under FreedomPop’s purview, that same chunk of data access would users a relatively scant $25 to $40.

If it seems like FreedomPop is spending too much time and effort focusing on iOS devices, fear not — Miller also confirmed that Android is “on the roadmap,” though exactly how far down that is on the company’s list of things to do is still unclear. Then again, this iPod case wasn’t supposed to happen for a while, so who knows how long it’ll be before the first Android-friendly FreedomPop cases hit the streets.