When Yahoo acquired IntoNow last spring, the “technology powered media company” sought ways to connect users playing around with their iPhones and iPads with content that they were watching on TV. Today, about 80 percent of users watch television with some sort of mobile device in their hands. But mostly what they’re doing is checking email and playing Angry Birds. Now if only there were some app that could get them to pay attention to TV-type stuff while commercials are on. That’s what IntoNow and other second screen apps are all about.

Anyway, the newest IntoNow release — the company’s third major update — takes a step back from earlier versions, which were focused on TV discovery and sharing metadata with users. It found that users were getting little actual utility out of those features, and they weren’t coming back for more, according IntoNow Founder and VP of Product Adam Cahan. So the team set about re-imagining ways it could promote more interaction with the app.

So what’d it come up with? For one thing, the new app also has a new TV and music sync function, which lets people know which songs are in the background during the middle of a show or as the credits roll. That doesn’t just apply to studio songs, but it can also help identify covers and live performances. So when you hear a song you like on American Idol, you can find the original. Users can then purchase a song on iTunes or watch the music video on YouTube.

But the biggest new feature is probably the addition of CapIt, which lets users capture and share photos from the TV shows that they’re watching. When watching a TV show with the IntoNow app, users can choose to CapIt during memorable moments, and the app will let them choose from multiple images that occurred prior to doing so. Users can then pick an image and share it with friends on Twitter, Facebook, or IntoNow. Users can also add captions, using the Meme-worthy Impact font, to add their own humor to screen captures. 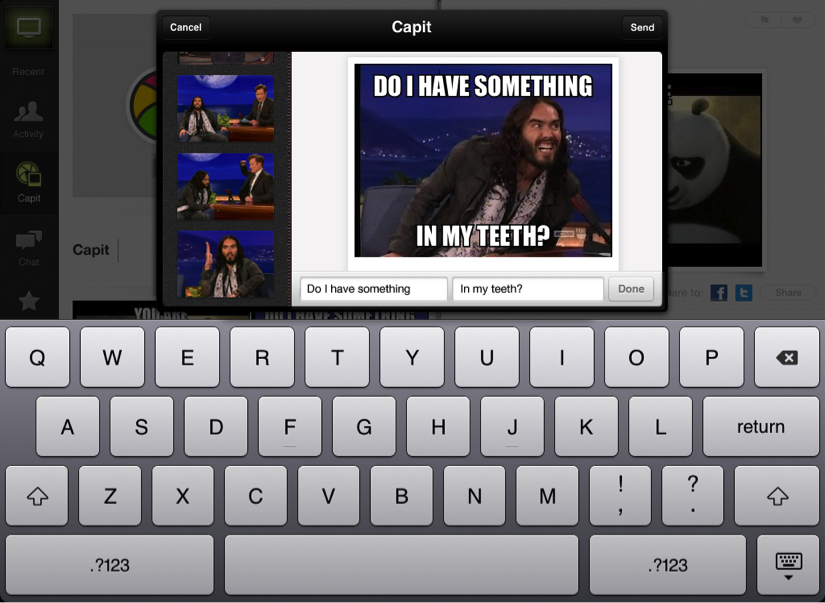 On the backend, CapIt works by capturing one image per second of pretty much all the moments that happen on screen, and then holds them for a week. That’s more than 15 million images a day, according to Cahan. So even if you’re watching something on DVR, it will be able to match your image, as long as it’s been over the past week.

IntoNow also has rolled out a new group chat feature that will let users interact with each other. The function allows users to see which friends are available, so they can easily create chat conversations with each other. Friends can also create recurring conversations live when new episodes of their favorite shows air.

Frankly I’m not huge on second screen apps, but adding functionality like CapIt could give IntoNow a huge boost. With more than 3 million downloads, it’s already doing pretty well. But giving users an easy way to meme-ify TV could win over a lot of interest, if the right crowd catches on.