If you were paying attention to Twitter today, you were probably met with two conflicting sides of the 2012 Olympics Opening Ceremony. On the one hand, you had those who were on the ground (or who had access to the live stream somehow — more on that later), and those who were bitching about not being able to watch the ceremony live.

While most of the rest of the world — or at least Europe — was watching the ceremony live, U.S. audiences were held hostage by NBC, which holds the rights to the games here. Rather than broadcasting the biggest event of the Games live as it happened, NBC decided it would air the ceremony on a tape delay, to capture a larger overall audience.

Now, tape delays are nothing new, but they do seem archaic at a time when online video and social media bring an air of immediacy to live events. The existence of the NBC Olympics Twitter account is evidence of this, but the account seems totally misused in this case: NBC live tweeted the whole ceremony, with no apparent sense of irony around the fact that its target audience couldn’t actually watch the events it was describing. Instead of building excitement around the ceremony, and engaging with its viewers, all NBC ended up doing was frustrating its audience — the people who care most about watching the thing.

So really, how bad was NBC’s strategy around the U.S. broadcast of the 2012 Olympics Opening Ceremony in London? So bad that Mark Benioff, chairman and CEO of Salesforce.com, and someone who should really fucking know better, tweeted out a link to a pirated live stream of the ceremony taking place in London. (Ironically enough, he was tweeting about the appearance of Sir Tim Berners-Lee, creator of the World Wide Web, that magical thing which made the pirate stream available to the rest of us.) 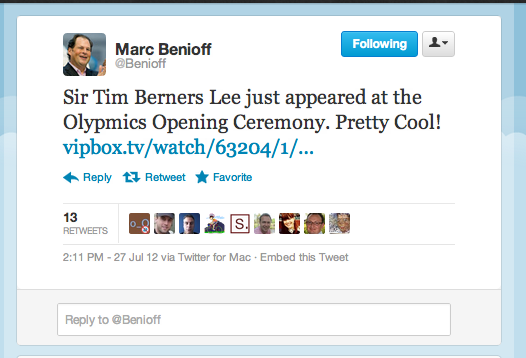 Think about that for a second — you’ve got a titan of industry telling viewers to ignore the local broadcast rights and pay attention to an illegal copy of the event instead. Telling viewers not to worry about waiting for the taped broadcast, that this is something you should be watching right fucking now, and damn NBC if they’re not making the stream available and someone else is. The big lesson here is that if people care enough about finding a certain piece of content and watching it — live or otherwise — they probably will.

The sad thing is that NBC probably could have had things both ways — it could have live streamed and broadcast for the work-time crowd and those kicking it at home, and still had people show up for a re-broadcast after work, if they couldn’t watch live. This is a lesson that we thought NBC had learned from the 2008 Olympic games, when it held back live streams of the games for events that would be later broadcast on tape delay. To its credit, NBC is live streaming most competitions, even when the broadcast of those events will happen later. But for whatever reason, that lesson wasn’t applied to the opening ceremony.

No doubt NBC made the decision not to broadcast the ceremony live because it was worried it would lose some of the primetime audience — after all, people are more likely to show up and watch something at 8:00 PM than mid-day on a Friday. It had advertisers who paid big money to show up against the event, and it didn’t want to piss them off by running the ceremony early, when people were at work and would only be half-paying attention. Maybe it thought that if it broadcast the ceremony live there wouldn’t be a primetime audience.

So here’s an idea for NBC in the future, especially when it tackles the 2014 Winter Olympics in Sochi, Russia: Forget about the tape delay. Or sure, show the ceremony in primetime, but also show it live while it’s happening. Those who care enough to get up and watch the thing at 6:00 am will do so — and the rest of the audience will show up in the primetime hours, just as they always have. And then your twitter stream won’t look so stupid and embarrassing and frustrating for those who actually want to see what you’re tweeting about.