Stamped, the ex-Googler backed startup for sharing your favorite things, is rolling out a major revamp of its product today, and is adding a buzz-worthy lineup of new strategic investors, including celebrities like Justin Bieber, Ellen Degeneres, Ryan Seacrest, NBA all-star Baron Davis, Bieber’s manager Scooter Braun, as well as media companies The New York Times Co. and Columbia Records. Also going in on the round are notable tech industry names like Google Chairman Eric Schmidt (via TomorrowVentures), Brian Lee of ShoeDazzle, LegalZoom, and The Honest Company, Pandora CTO Tom Conrad (his first investment), CrunchFund, and Metamorphic Ventures.

Not surprisingly, current investors Bain Capital Ventures and Google Ventures also participated, bringing the company’s total raise to date to $3 million. But while the celebs will bring new eyes to the service, it’s the app’s redesign that will be the big draw once the celebrity shine wears off.

“We’re Not A Way To Rate Things”

The Stamped mobile app first arrived on iOS back in November 2011, as an alternative way to mark and share the things you like in the real world. Instead of giving something one star or five-star rating, for example, you would just “stamp” it, meaning you approve. But the company was soon – and perhaps unfairly – lumped into a growing crowd of “rate everything” apps which included the likes of Kevin Rose’s now-shuttered Oink, and eventually, even a social/local/mobile spoof app Jotly, from UberConference’s maker Firespotter Labs.

“Because of the way other services have been launched around us, we were kind of grouped together, but that was improperly done,” says Stamped co-founder and CEO Robby Stein of the trendy rate-it-all space. “We’re not a way to rate things,” he clarifies. “We’re a way to share your favorite things. We want you to have one beautiful place to stamp your favorite movies, books, restaurants, and anything that you love, and create one home for all that to live.”

What’s New In The App 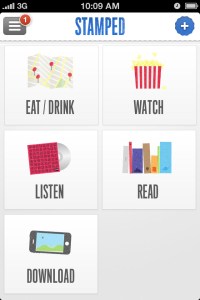 With the relaunch of Stamped version 2.0, the service is aligning itself with that original vision. The new app does feel less like a simplified rating system, and more like a social discovery service. Part of that comes from a new section in the app called “The Guide,” which lets you find new things to “eat/drink,” “watch,” “read,” etc., as recommended by your friends.

“The big thing we’ve always wanted to do is move from the wisdom of ‘the crowds’ to the wisdom of ‘your crowd,'” says Stein. To get closer to that goal, the startup has been staffing up with more ex-Googlers, including Paul Eastlund, a former tech lead from Google Maps, new designer Anthony Cafaro, and new engineer Geoff Liu, also formerly on Google Maps.

Not only has the redesigned app introduced the new “Guide” section, but the overall experience has been improved, and includes things like a richer, more media-rich news feed of shared items, and more notably, integrations from several third-party services to flesh out what you can actually do in the app. Now, you’re not just reading about what friends recommend, you can also stream music from iTunes (previews), Rdio, or Spotify, for example; it connects to OpenTable for reservations, pulls menu data from SinglePlatform, and offers product details from Amazon or, in the case of apps, the iTunes App Store.

Friends can like, comment or add items their friends share to personal to-do lists in the app. These activities are visible to others in the news feed section, in a somewhat Path-like style which uses friends’ profile icons to show engagement at a glance.

Stamped Arrives On Web, Too

Another new component to the service is the expansion to the web, offering an online home for your collection. “I think it really becomes a reason why people keep stamping things,” Stein says of the new website, “because you’re building this beautiful thing…now when people ask you, ‘what are favorite places?,’ ‘what music are you into?,” they can just look at this interest profile that represents all the things you love.” 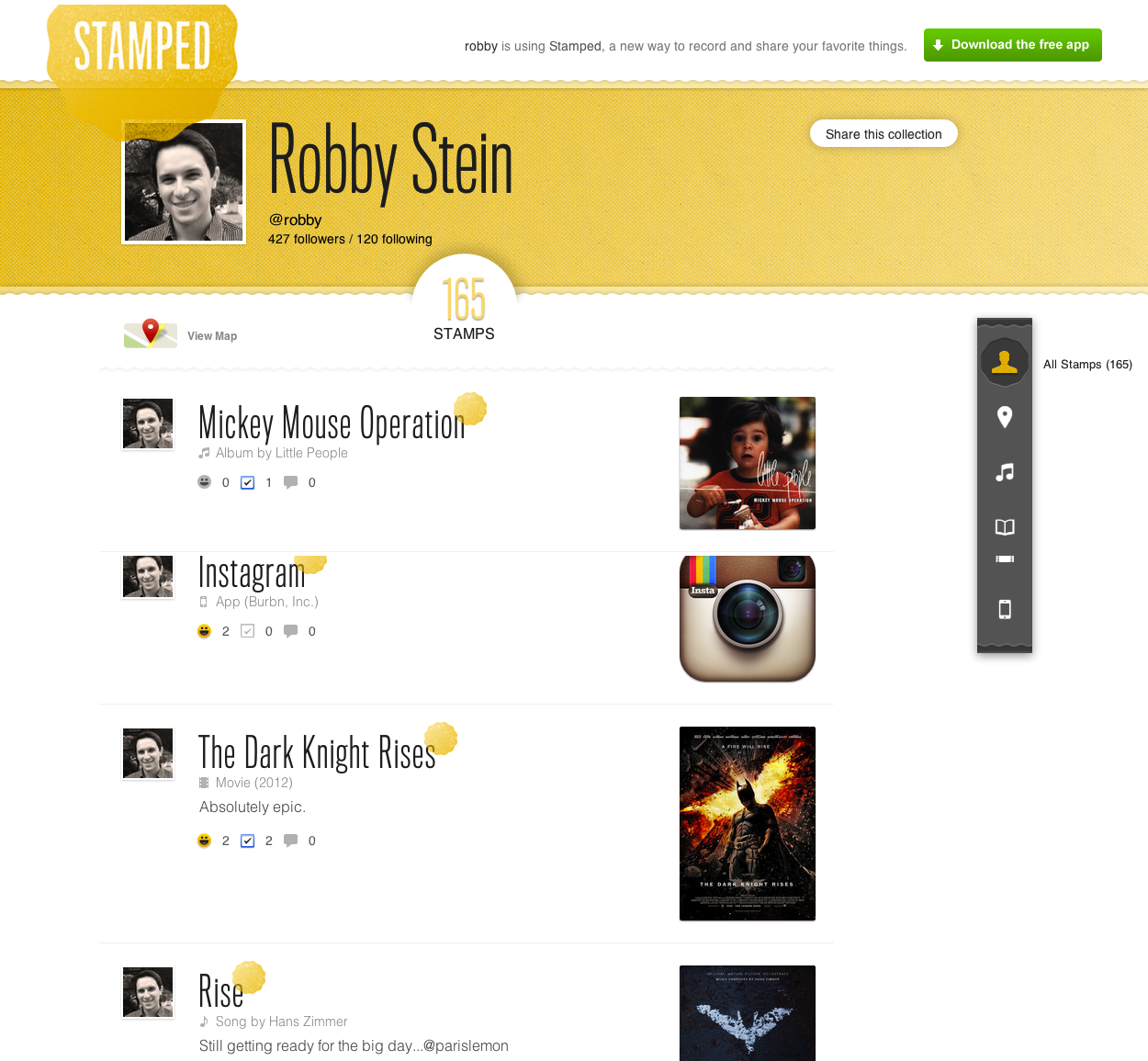 For celebrity watchers, there’s an obvious draw to the new Stamped (what does Bieber like?), and for others, it may be about seeing what books NYT recommends, perhaps. But where Stamped still needs work is helping regular users build up their own collections of things – something that, while easy enough to do, can still feel like a bit of work to do at scale, in order to really create a holistic picture of your interests. The ability to import data or make suggestions based on your activity on some of these third-party services would be a good addition in the future. Stein says that they’re “still exploring” other integrations right now.

While the size of the strategic round is not being revealed for competitive reasons, Stein notes that this is the first time Stamped has confirmed numbers related to its funding. Combined with an earlier seed round, the company has now raised $3 million in total funding to date. Beliebe it or not (yeah, I went there), this isn’t Bieber’s first time out as a V.C., nor Seacrest’s, nor Ellen’s. Celeb investing is the new “I just wanna direct.”

The new Stamped app is rolling out starting now. The updated version will be available in iTunes here.