AT&T unveiled its new Mobile Share plans earlier this morning, and at first blush it seemed awfully familiar. Under those new plans, users pay a set monthly access fee for unlimited talk, messaging, and a specified lump of data, with different classes of devices adding to the total monthly cost.

It’s nearly identical to how Verizon’s Share Everything plans work, but that’s not exactly new for the two carriers — they’ve been jumping on and implementing each other’s ideas for years now. That said, there are still some notable differences between how AT&T and Verizon have approached the shared data situation.

The biggest of those differences? Unlike Verizon, AT&T’s Mobile Share plans supplement their current offerings instead of replacing them, so new customers don’t need to run with a shared data plan if they don’t want to. 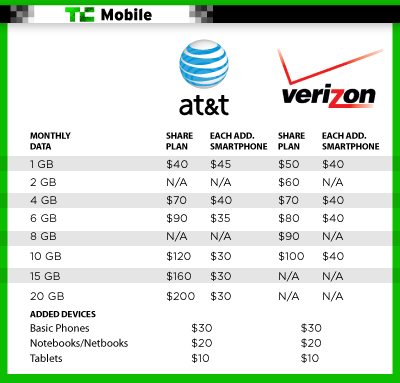 There’s more, of course. AT&T’s tiers top out at 20GB for instance, which seems a bit unnecessary for anyone buy business customers; Verizon has instead padded out the lower end of their plan spectrum with a 2GB option. Verizon’s Share Everything plans tend to look a hair cheaper than AT&T’s too, but AT&T’s Mobile Share plans also reduce device fees as data caps grow larger. Consider a two smartphone family plan that shares 6GB of data — before taxes and fees, that setup will cost both Verizon ($80+$40+$40) and AT&T customers ($90+$35+$35) the same base price of $160/month. Meanwhile, a 4 smartphone family plan would cost Verizon customers a total of $260 before taxes and fees, while it would set back AT&T customers $240.

All things considered, there’s no clear winner between the two since they both depend so heavily on the kind of setups people are working with. What’s perhaps more important is the big picture. Unlike Verizon, which decided to go all-in on their newfangled share plans (and miffing a few customers in the process), AT&T is trying something a little different: it’s offering its new subscribers a choice.

In the event that a shared data plan doesn’t make sense for a new user’s needs, there’s no need to run with it. Meanwhile, new users looking to ink a two-year deal with Verizon have no other option aside from a Share Everything plan, which can be a hit-or-miss solution for certain situations. The policy comes in especially handy if you’re still clinging to a grandfathered AT&T unlimited data plan — as Peter pointed out earlier, those aren’t going anywhere. Compare that to Verizon’s approach, which sees unlimited customers who want to keep their plans sticking with the devices for the long(er) haul, or paying the full unsubsidized price for new hardware.

AT&T’s Mobile Share plans co-exist with their current offerings instead of replacing them, and that’s arguably the way it should work. When it comes to this sort of thing, more options mean more control over your plan. Granted, not every option is one worth considering, but at least those doors aren’t closed to you right from the start. Sadly, the major carriers are still a ways off from offering what many consumers are clamoring for — a dumb pipe that doesn’t tie up data into proprietary packages — but unless there’s a dramatic policy shift in the works, we’ll have to take what we can get for now.