Editor’s Note: Brenden Mulligan is an entrepreneur and product designer who created Onesheet, Webbygram, TipList, ArtistData, MorningPics, and PhotoPile. You can find him on Twitter at @mulligan.

Admittedly, I have a negative bias towards overhyped startups. If a company gets a lot of attention before they do anything significant, I’m less likely to try their product and when I do, less likely to have a positive feeling about it. I realize this is a weakness I need to overcome, but it’s the way my mind works.

There are few better examples over the past few years of overhyped startups than Path. Two years ago the company, after much uber-super-duper-stealth-mode speculation, launched a sub-par photo-sharing product that offered little utility over the other products in the space. Then, Path turned down a rumored $100m acquisition, again, before they’d released anything worth buying (except the team).

So I’m choosing a very public place to admit the following: after using the new version of Path since November, I believe it is one of the best mobile products I’ve ever used and possibly the best true social network I’ve ever been a part of.

Realizations like this don’t come easy and it’s led me to think a lot recently about why the network appeals to me so much. After all, I learn more from Twitter and have more friends on Facebook. One would think the value of those social networks would outweigh Path. And maybe their overall value does. But there’s something very different about Path. Something special that makes my Path experience much richer than the other social networks.

The conclusion I’ve come to is what makes Path so special isn’t its limited friend count. It’s not its beautiful design (which I dug into a few months ago). What I’ve realized is so special about Path for me is the consistency of tone.

When I open Path, I’m seeing experiences people are having. Some of those experiences are checking into a new place. Some are posting a photo. Some are listening to music. Some are going for a run. But for the most part, they’re all experiences. And they all have a common tone, meaning they all feel like part of the same story. Everyone has their own storyline, but together, everyone’s moments merge together into a consistent shared biography.

To further illustrate this, let me summarize the newest 8 updates for 4 different social networks:

Facebook. A barrage of whatever can be crammed into a single newsfeed.

Twitter. A stream of extremely useful and extremely random information.

Although the content in Path might seem more monotonous, what makes it really unique is the content is so consistent. It’s all friends sharing experiences. It’s not them sharing what they’ve read, or some photo they found in a magazine, or an article about their company. It’s personal moments.

The benefits of creating a community with a consistent tone means that some content just doesn’t fit. Lately I’ve noticed  three examples of content that hasn’t fit Path:

Some people in my network occasionally use Path to share links. These come in two categories. The first is links to things they have written or things written about them/their company. Generally, this fits the tone of Path, although still feels a little off. But since these are generally about accomplishments of people I’m friends with, it’s welcome content. The second category is just standard link sharing that you’d see on Twitter. This feels very weird. Path isn’t an information network like Twitter, it’s a social network. It’s not a place I go for news, it’s a place I go to see what my friends are experiencing. Links to insightful articles unrelated to my friends don’t feel like they belong in this environment.

This is something I’ve been guilty of using Path for, and certain members of my network have voiced an opinion that they’d prefer to not see it. Occasionally, someone will post an invitation for others to come to an event, to join them for a meal, etc… Although this is a personal request that you’d think would fit with a social network, the complaint has been that one of the beauties of Path is that consuming the feed is location agnostic. When asking if friends want to get together for lunch, someone is posting something completely irrelevant to a large part of their network. I have friends exploring France right now and seeing their photos is delightful. But if they were constantly asking Path if people wanted to join them for a glass of wine, it’d be annoying because 99% of their network isn’t in France. 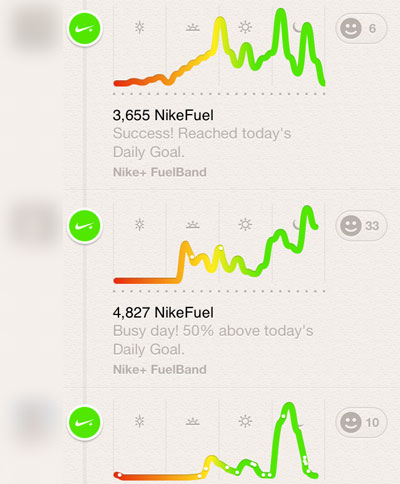 This is a new one, and caught me a bit off guard the first time I saw it. Recently, Path added Nike FuelBand integration, where at the end of each day, a user’s Fuel graph is posted to Path. This immediately struck me as out of place. While the graph certainly represents the result of many experiences, something about it doesn’t fit the tone of the rest of the updates. And since these are posted at the same time each day, it feels spammy when suddenly 5 friends have graphs posted automatically when they didn’t trigger the action.

The FuelBand graph inclusion got me thinking about overall updates and where their place is (or isn’t) in this network. Every other action on Path requires someone to trigger it through a specific action at a specific moment. They turn on their phone in a new place, they wake up, they start or finish a run. But the FuelBand graph is automatic. It posts every day. And that makes it feel different.

My hypothesis is that automatic updates will always feel weird and spammy in Path. Think if Path connected with Flipboard and at the end every day, it posted a summary of the articles the user read. Or they integrated with Spotify, and it posted statistics on all the music listened to. For me, this content just doesn’t fit. This content makes Path feel more like Facebook: a dumping ground for any app that can get a user to give posting permission.

The Path team knows what they’re doing and I’m sure will find a way to make data coming in from other apps work. But they need to do it in a way that fits the tone of the rest of the content. If that tone becomes inconsistent, the thing that makes Path special will be lost.

I’m a big believer in what Path is building. They’ve created a very unique environment, and they need to do everything they can to preserve it. I’m sure they will.