This week the BBC tested out Facebook advertising by running a campaign for the Facebook page of a fictitious small business called VirtualBagel. The investigation was headlined “Facebook ‘likes’ and adverts’ value doubted”. During the week over 3,000 people Liked the ads even though the company doesn’t exist and simply shows you a picture of a bagel. The ‘investigation’ is partly a reminder that Facebook still has issues with fake profiles and Astroturfing, but is also a simple re-stating of the fact that you get what you pay for and if you put up a dumb ad targeted too widely you’ll waste your money.

The BBC’s tech correspondent Rory Cellan-Jones spent a whole $10 on Facebook ads to promote the page, adding a little light targeting to reach a potential audience of “112 million customers” and garnered 1,600 Likes within 24 hours. VirtualBagel turned out to be popular in Egypt, Indonesia and the Philippines, but not in the UK or U.S. where bagels are more typical fare. However, most of the people who liked the page appeared to have fake profiles which had also Liked a bunch of other random pages.

Finding he got a lot of Likes from places that probably wouldn’t be interested or even able to do business with his UK-based Bagel business, Cellan-Jones ends up pondering the efficacy of Facebook ads when there were so many fake profiles on the system.

Facebook has responded saying – naturally enough – the experiment is “worthless” because the ads were not targeted enough, and yes, there are fake profiles in Facebook but they act to discourage the practice, and fake profiles are not allowed under their T&Cs. This is not exactly news.

But, asked the BBC, can Facebook’s $100bn valuation be justified when there are so many fake profiles? Well, how can we put this Rory, did you do the same campaign for $10 on Google AdWords and find a lot of bad clicks?

Because there’s a truism here – yes there are scammers and spammers and astro-turfers on the Internet. But at least on Facebook, you can generally see where they are coming from and get a sense of whether they are fake customers or not, which is the significant difference with something like AdWords, and of course why Google+ is crucial for Google’s future going forward in terms of ad targeting.

Facebook has responded, with their response summed up with the statement: “We’ve not seen evidence of a significant problem. Neither has it been raised by the many advertisers who are enjoying positive results from using Facebook…. Looking at the test case you flagged – the person has, for some reason, taken a scatter-gun approach to distributing their ads, sending them to multiple countries with little or no demographic targeting.”

Now, the Beeb was put up to this idea by a social media consultant Michael Tinmouth who’d found his small business clients were clicking false clicks on their ads. Here’s a little information on Tinmouth.

He describes himself as a “Journalist, investor and communications strategist tweeting about social media, entrepreneurship, small business and occasionally my travels and cats!”. Tinmouth is a former editor of Entrepreneur Country, which is run by Ariadne Capital, a high-priced startup/investors introductions agency.

Until April this year Tinmouth had about 10,000 Twitter followers, but then on 15 April his follower count jumped dramatically to nearly 30,000. 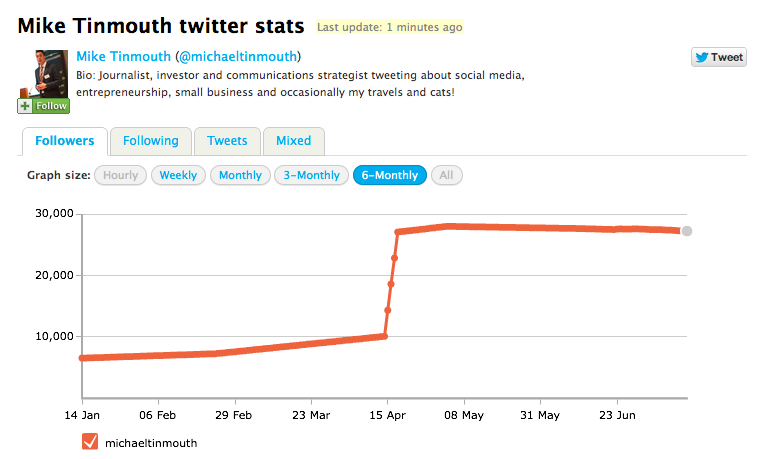 There is no suggestion than Mr. Tinmouth “gamed” his followers by using one of the many services out there to buy Twitter followers.

And it would be cruel of us to point out that there may potentially be some fake Twitter profiles following Mr. Tinmouth, so we won’t do that.