Tuenti, a Spanish social network with 13 million users that the carrier Telefonica majority-acquired back in 2010 for $99 million, is today kicking off a global launch — the first time it will be available outside of Spain and beyond an invitation-only basis. At the same time, Telefonica is adding in some new features to the free service as it looks to go head-to-head with Facebook and Twitter, particularly in the space of mobile social networking, where Tuenti already counts 6 million users: it’s launching an integrated mobile messaging app as well as beta versions of Tuenti apps for Android and BlackBerry devices, with iOS and Windows Phone apps (latter pictured here) due “in the coming weeks”.

Telefonica’s footprint spans both mobile and fixed operations across Europe and Latin America, covering 25 countries and 309 million users, and the carrier is hoping that this captive audience will be a natural user base for this latest foray into services beyond basic voice and network connectivity. In keeping with that global footprint, Tuenti is launching today in English, Spanish, Portuguese, French, German, Italian, Dutch, Slovak, and Czech. To date, Telefonica notes that Tuenti is the most-trafficked website in Spain, with 6 million monthly mobile users, 40 billion monthly pageviews, and 400 million chat messages sent per day.

Tuenti looks somewhat like a mashed-up, simplified version of Facebook and Twitter in both its mobile and web versions. Like Twitter, which was was originally conceived as a mobile service, Tuenti’s messages are limited to 140 characters. Like Facebook, it’s about uploading status updates and photos — “moments” in Tuenti lingo — that subsequently appear in your contacts’ timelines. Ultimately, its basic concept is “social done simple,” with three basic options: broadcasting messages to everyone, to your close friends, or just directly to single contacts.

The name is a clue to how the service is architected: “Tuenti” is wordplay in two languages. In Spanish, it’s “tu entidad” (your entity, your identity); and in English it’s a pun on the number 20. The idea, the company says, is that in the real world, most people only regularly chat with 20 friends or less, with 90 percent of messages actually only sent to the “same few friends.” In Tuenti, your 20 friends become your default network. “Why call everyone ‘friends’ when only 20 people are really friends and the rest are just contacts?” asks Zaryn Dentzel, Tuenti’s CEO.

That concept of a large book of contacts, but a closer group of friends, is something that also underscores the site’s push on a more private kind of social network. Sign-ups are done using people’s real names, Telefonica says, requiring users to enter a mobile number to verify their accounts. Other features that point to how Telefonica is trying to make people feel more secure on this network are that it sends data via SSL, and it points out that none of the activity on Tuenti is ever indexed in Google.

The messaging option on Tuenti — allowing people to chat in real time — is part of the new set of services coming online today, and is a mark of how Telefonica wants to bridge some of its more legacy features into some of its newer platforms:

“We’ve integrated a globally competitive messaging service with our core social network, while incorporating a uniquely simple privacy model that makes it easy for users to control what they share”, said Dentzel in a statement.

It’s part of a bigger strategy at Telefonica that has seen the creation of a new business unit, Telefonica Digital. This takes the carriers’ multiple, regional digital assets and puts them under one roof in order to better capitalize on its scale, and to better position itself as a player in fast-growing space of digital media, partly to offset declines in more traditional lines of business like voice.

So far, Telefonica’s been making some bold moves: it launched a free voice and messaging app, TU me; it’s integrating its carrier billing services into popular services like Facebook, Google, Microsoft and RIM; and it has been investing millions into hot new startups to make sure it can have a place at their tables, too.

What’s not clear yet is how Tuenti — which, at least at launch, is free to use — will be making money. If it’s advertising that will ultimately butter Tuenti’s bread, then the network’s push on privacy and security may start to encounter a few bumps. (We’re hopefully speaking to Tuenti’s CEO in just a bit, and when we do we will update with his thoughts on the matter.) 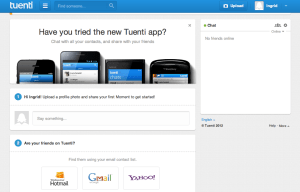