The Crowd is on the loose. Thanks to the JOBS Act, mainstream attention came to crowdfunding this year, and platforms like Kickstarter and Indiegogo have been benefitting in kind. Kickstarter, in particular, has seen an exponential increase this year in how much capital its projects have been able to raise. (Exhaustive post on the subject here.) The Crowd has pledged $275 million to some 63,000 Kickstarter projects to date, and companies of all breeds are now using these platforms as launchpads and for a little proof of concept.

But, sadly, you know who really isn’t benefitting from the crowdfunding boom? Healthcare startups. Brian Dolan of MobiHealth points out that, in fact, Kickstarter officially prohibits health, fitness, and medical projects. Healthcare is absolutely jonesin’ for innovation, and there are tons of cool health companies trying to change the world — some of them even a little sexy and consumer-facing.

That’s why serial healthtech entrepreneur Alex Fair and founding Kickstarter product manager Mike Pence have set out to give health-focused entrepreneurs and projects a Kickstarter of their own. Medstartr, which launched in beta today, is a crowdfunding platform designed specifically for healthcare companies, providing startups with a vehicle to market their wares, generate awareness and raise capital — direct from strangers, investors, and Doogie Howsers alike.

Sure, support for healthtech startups — and their small victories — are worth noting just on principle. But, MedStartr isn’t aiming just to be a lazy port of Kickstarter/Indiegogo to healthcare. Fair was inspired to create Medstartr not only because of the rejection his healthtech ideas found on Kickstarter, but also because of the much-ballyhooed JOBS Act. The legislation legalized funding in startups by non-accredited investors and has likely changed early-stage investing for good.

The SEC is still working out the specifics of the regulations aimed at bringing some order to the wild and wooly west that will be Crowdfunding 1.0. In particular, the government must decide on where to cap the amount of capital businesses can raise via crowdfunding platforms, whether or not they’ll be able to raise cash by selling securities, etc. And, as it goes with medical biznass, the regulations will have specific measures (i.e. restrictions) on health businesses, with some of those being determined by the FDA.

Until the regulations are released, crowdfunding platforms have to wait and over-prepare if they can. In the meantime, MedStartr is limiting the amount of capital its projects can raise to $40,000 and, like the Kickstarters of the world, MedStartr is non equity-based, instead offering market validation and non-dilutive funding as value propositions for startups. Once SEC rules are set, however, Fair tells us that the company will establish an equity model. 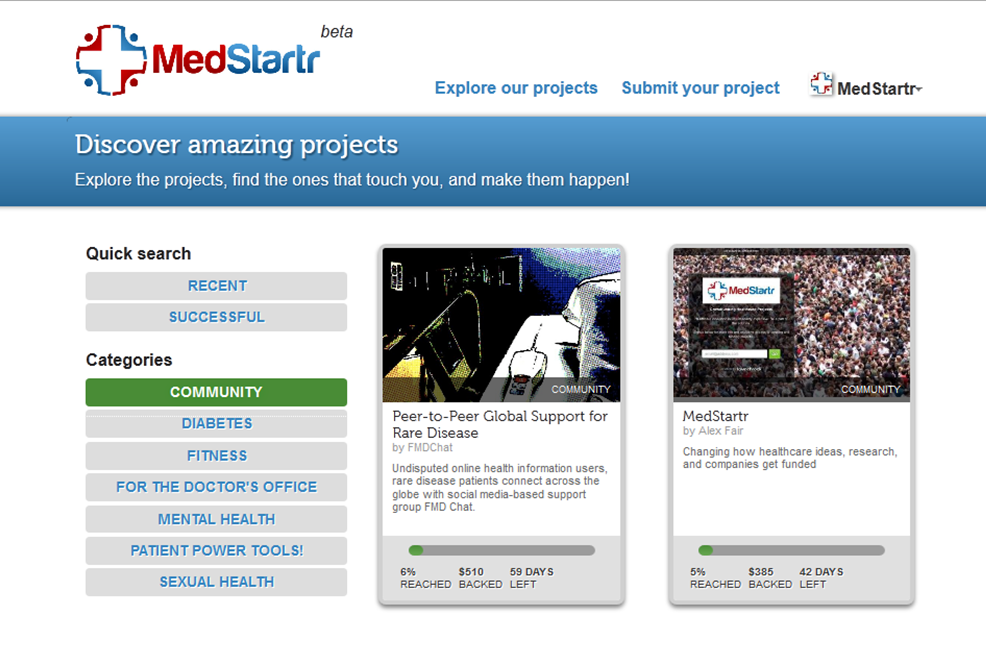 For starters, Fair has nearly two decades worth of experience in healthtech, health IT, and consulting, which he plans to leverage to help MedStartr’s health projects not only reach their targets but find follow-on funding and support. Of course, while it will become trickier at scale, entrepreneurs can expect much more of a hands-on, or proactive, approach from the founders in comparison to Kickstarter.

They have already started to, and plan to continue with an events-based model, in which MedStartr will hold mini-conferences (with panels, etc.) in various cities, allowing project creators to set up booths and interact and network with potential investors. Like a MeetUp for Medics.

Fair also sees some bigger potential industry benefits than the requisite low-cose inbound marketing that is typically a built-in perk of crowdfunding platforms. Up to this point, hospitals, doctors, patients, and healthcare companies have largely lacked public resources by which to discover, interact with, and invest in health companies.

Many health or medical projects also inherently have highly motivated and engaged user bases (see 23andMe and CureTogether for examples), as they often promote healthier lifestyles, provide support for people in need or suffering from illnesses, try to find cures, and reduce medical and insurance costs. All of which can be emotional issues.

A crowdfunding platform for health projects allows the many who, say, want to help make or find ways to contribute to the health of loved ones to participate actively in the process. And feel a direct connection to projects and their founders and feel they’re making a difference. MedStartr launched with both a diabetes project and a project that supports those with STDS, for example.

On top of this, it seems that MedStartr also has the potential to incorporate some elements of AngelList and healthtech incubators like Rock Health and Blueprint. The crowdfunding platform can function as a screening ground for investors. Startups turn their project pages into pitch platforms, incorporating video, images, etc., and investors can interact and connect with the entrepreneurs through the site. 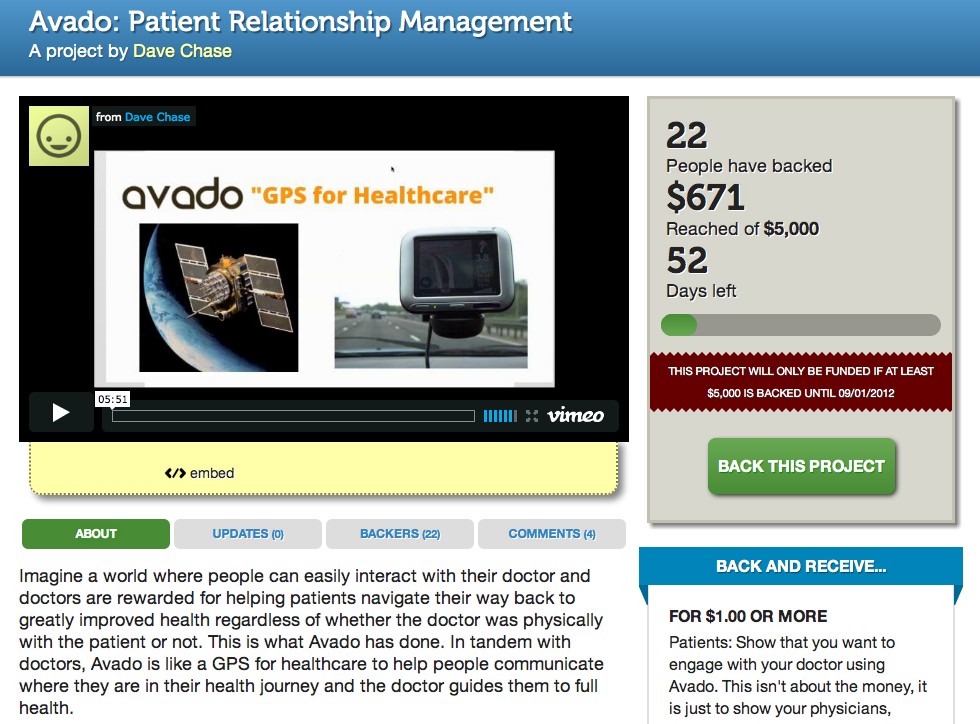 MedStartr can also incorporate partner programs that allows doctors, CIOs, or executives of health companies to use MedStartr for validation and deal flow and to support them. If they like the idea, they can offer up a deal. If they sign up a certain number of physicians, attract a certain amount of feedback and hit a set target for funding, then a CTO of Pfizer, say, could reward them by funding their first pilot study. The company already has a big pharma company and medical society on board.

All that being said, MedStartr’s current incarnation owes a lot to the popular crowdfunding platforms. Its name (and the design of its site) make that apparent enough. But, if MedStartr is able to deliver on even half of its goals, it can become more than a valuable, feel-good medtech experiment. VCs and investors want to invest in great healthtech companies, and this gives them a great way to interact with health startups and source potential investments.

It’s not clear that there can be enough cross-over from mainstreamers and consumers to give MedStartr the lift it needs to hit scale, rather than remaining a purely industry resource. But if they play it well, and turn it into a viable Kickstarter/MeetUp/AngelList hybrid for health startups, why not?