During an awards ceremony in Sydney today, Ukraine’s team quadSquad just won this year’s Microsoft Imagine Cup student technology competition (and $25,000) thanks to its gloves that can translate sign language into speech. The team beat out 75 other groups that made it to the worldwide finals in Australia where they had to present their projects in front of a group of judges. This was Microsoft’s 10th Imagine Cup and the event, which combines the energy of a soccer World Cup with a pitch competition for students. This year’s Imagine Cup’s theme was “Imagine a world where technology helps solve the toughest problems” and most teams focused on healthcare and the environment. 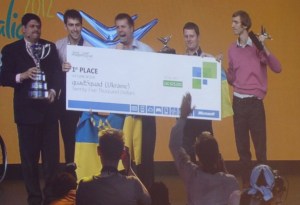 Japan’s team Coccolo finished second in the Software Design category with a system that can reduce energy use by having lamps talk to each other and find spots where lights can be dimmed. Team wi-GO from Portugal, which developed a Kinect-powered shopping cart that can follow disabled people through a store, finished third.

During the event, Microsoft also promised to ship a Windows 8 machine to every competitor who made it to the finals after it ships the new version of its operating system in late October (no word on whether this would be a Surface, though).

Next year’s event will take place in St. Petersburg. With the release of Windows 8 just around the corner, chances are next year’s event will put a stronger emphasis on Windows, but interestingly enough, there were quite a few teams that competed this year that already used Windows 8, even outside of the specialized Metro-style app category. 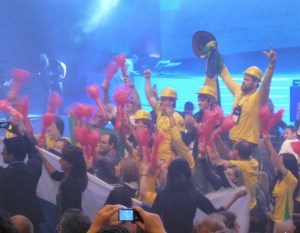 Other winners include Germany’s Greenway, which won the Coca-Cola-sponsored Environmental Sustainability Award. Greenway aims to make traffic jams a thing of the past by building a smart navigation system that doesn’t just route drivers around traffic jams but actually coordinates traffic across entire cities.

The Italian team Ingenium won the Health Awareness Award with a project that aims to bring better therapy solutions to those dealing with Autism but who don’t have easy access to therapists.

While the U.S. team from Arizona State University didn’t make it into the top 20 in the flagship Software Design Competition, the U.S.’s Drexel Dragons team won the Game Design (Phone) category.

You can find a full list of all the winners here.