With Windows Phone 8’s launch fast approaching, it not exactly a surprise to hear that Nokia is slaving away on some new hardware. The Nokia Lumia 910 — which some suspect is a Lumia 900 meant for T-Mobile USA — was recently spotted thanks to Nokia’s Remote Device Access service, but that’s not all the Finnish company seems to have in the works.

A new device called the Nokia Lumia 1001 was also detected by one of Nokia’s remotely-accessible phones, and its significant model number jump could mean it’s the company’s first Windows Phone 8 device. Or does it?

If you’ve never had the chance to play with Remote Device Access it allows users to connect to a whole host of Nokia hardware from within a browser window. It’s ostensibly meant for developers to test their applications and code on real (if distant) hardware, but it also provides an occasionally neat glimpse into what Nokia is working on. Take the Lumia 900 for instance — then referred to as the “Nokia 900 Windows Phone,” its existence was detected by a device being controlled remotely late last year.

It’s worth noting though that devices like the Lumia 910 and 1001 aren’t directly accessible to users — instead, they’re spotted when a user commands one of Nokia’s devices to search for other Bluetooth-enabled devices nearby. 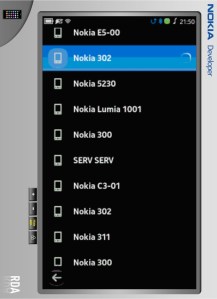 I was initially able to spot the Lumia 1001 (see above) while I was poking around with a Nokia 500. Just to make sure I wasn’t seeing things, I jumped into a different device (the Nokia N9, if you were curious) to see if the device in question was still hanging around.

At this point, there’s no way to discern any of the device’s particulars or even if it’s a real handset. Considering the sort of attention that the RDA service has been getting lately, it’s entirely possible that someone at Nokia has a sense of humor and changed one of the device’s names to “Nokia Lumia 1001” just to mess with all of us.

That being said, there’s little question that Nokia is working on some Windows Phone 8 hardware behind closed doors, in preparation for the platform’s launch later this year. Longtime readers may also remember that Nokia switched to a “larger-is-better” numerical naming scheme last year, with their most premium handsets getting high model numbers.

So far, Nokia’s Lumia 900 sits at the top of the heap, but with Windows Phone 8 barreling down the pipeline, it wouldn’t be surprise to see Nokia bump up their model numbers for their newest breed of Windows Phones. After all, the existing version of Windows Phone is being left behind in favor of a more powerful, unified platform — one would imagine they would use a much loftier model number (not unlike “1001”) to signify that transition.