ZipList, the shopping list startup nabbed by Condé Nast in April for a reported $14 million, has just added a nifty little tool that makes the “inspirational” imagery found on Pinterest a bit more practical. If you cook and you like pinning stuff, then you’ll like this,too. The company has introduced a web browser button that, when clicked, adds the ingredients from a recipe on Pinterest to your current shopping list, which you can view on your phone while at the store. OK, that’s kind of handy.

As a refresher, ZipList offers a service which lets users save recipes they find online and turns them into grocery store shopping lists by smartly extracting the ingredients you’ll need to buy, ignoring staples like sugar or salt, for example. You can later load up ZipList on your phone via an app to see what you need to grab.

Thanks to Pinterest, online recipe discovery has been booming. According to a PriceGrabber survey from March, 70% of Pinterest users cited “recipes” as their most pinned items, above other categories like home decorating and shopping. ZipList, too, started to see Pinterest engagement soar around Q4 2011, and by Q2 2012 had seen a 168% increase in Pinterest traffic to its service. Today, Pinterest makes up 30% more of ZipList’s reffering traffic than in Q4, the company reports. Currently, 67% of visits from Pinterest are from new visitors, who are now discovering ZipList as a source of online recipes. The visitors have pinned over 2,000 recipes to Pinterest from the site to date. 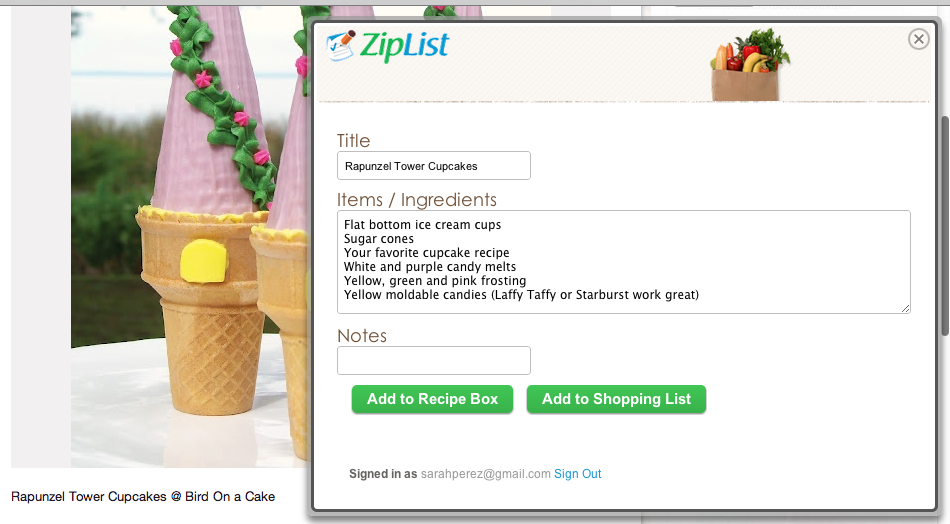 The web clipper is pretty self-explanatory, but here’s how it works, just in case. You drag the button on this page to your browser bookmarks, find a recipe you like on Pinterest, then click the button. On the occasion that ZipList can’t figure things out, it still lets you save the item to your online recipes in its service. Otherwise, it determines the ingredients you’ll need, then lets you either add the recipe to your account on ZipList or add the items directly to your ZipList Shopping List.

Since the idea behind all that recipe pinning on Pinterest is that, oh, I don’t know, maybe you’ll actually try to make one of those dishes, perhaps?, this web clipper is a useful little thing to have on hand. Heck, I’m also inspired to start cooking now. Almost.