Because there’s already a mess of public destination and travel information in databases like Wikitravel and Open Street Maps, rather than become another player in the brimming social travel space, Triposo took an algorithmic approach to travel recs.

This approach allows it to come up with relevant suggestions no matter where you are, with little effort required from the end users, making for what the founders call a “lean-back travel experience.” So, even though models, users and money have favored the social approach, Triposo has attracted nearly two million downloads (and has attracted fairly high ratings) of its travel guides on iOS and Android since launch.

This early traction has also been appealing to investors, with the latest interest coming in the form of a $3.5 million series A round led by Keval Desai of InterWest Partners. [The startup’s Form D filing, which was filed today, actually says that they’ve raised $4.2 million of a potential $5.3 million offered, but the co-founders tell us that the $700K includes the convertible note from a prior round, meaning the total raised as of today is $3.5 million.]

InterWest is the sole (return) investor in the startup’s latest round, which will see Desai joining the startup’s board of directors. The InterWest partner was also behind the firm’s recent investment in Gojee, which Billy covered yesterday. Both investments can be seen as part of the investor’s thought-provoking understanding of the evolution of the Web: That it’s moving from “a need-driven utility medium to a discovery-driven entertainment medium with room for multiple winners.” (More here.)

In a way, this helps answer the question of why, if search (Google) is looking to improve relevance and personalization by serving socially-authenticated results and much of the attention in travel revolves around friendsourced, social graph-based models, one would choose to invest in (or use) a tool that eschews friends for algorithms.

Obviously, Google results will remain a mix of both, even as social gets more play, and there’s no reason Triposo can’t add social layers on top of what they’re building. Plus, as Desai says, as the audience grows and our behaviors change, there’s going to be room for multiple winners — at least, that’s the idea.

For Triposo, the new investment adds to the $700K in seed funding it had raised to date from late-joining CrunchFund, Chris Sacca, Taher Haveliwala and Google Wave Co-founder and Google Maps Lead Engineer Lars Rasmussen — to name a few. The round brings Triposo’s total investment to $4.2 million.

Co-founder and COO Richard Osinga tells us that Triposo will use its new capital to expand its team, specifically in the engineering department, and to move into its new headquarters in Berlin. 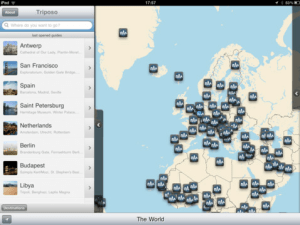 The team also just revealed a new and improved iOS app, which, in Osinga’s words turn Triposo into a “self-starter” — a travel guide that actively offers suggestions as to where users should go next. As users move about the country (and world), the app adjusts to location, the time of day, the weather, and the hours of local businesses in your vicinity, tailoring recommendations for destinations and adventures based on that realtime data. Pretty cool.

While the app represents a big step forward for travel guides, it’s still a work in progress, and the co-founders tell us that they’re now developing a big “version 2” of the app, which they hope to launch around the first of August. Stay tuned for more on that — assuming, of course, it doesn’t suck.

I’ve avoided rehashing the specifics of how Triposo’s algorithmic model works (so you can read more on it here), but it’s definitely an interesting point of differentiation in comparison to the friend-sourced and social authentication of travel sites like Gogobot, Trippy, and Tripping. (Though really the ones that stand to lose are traditional travel publishers, like Lonely Planet.) Not only that, but the better it can adjust to real world cues (location, weather, etc.) and serve useful recommendations accordingly, the more Triposo will stand out from the field. Utility + relevance + entertainment = happy travelers.