Call it the way we flirt now. Facebook games like Song Pop and Draw Something and apps like Pair are discovering novel ways to get you to connect online. The space is ballooning to the point where there’s even a couples app for co-founders.

True, the startup has had a fortuitous thumbs up from Zuckerberg, and then was the subject of a surprisingly conceptual post about simulated synchronous gameplay from Arrington. “You can’t get more lucky than getting your startup featured on Facebook founder’s status update!” wrote one commenter. Well, a gushing post on the personal blog of TechCrunch founder and angel investor Arrington surely can’t hurt.

So what’s driving Song Pop’s success? Well the feature that Arrington calls “simulated synchronous gameplay” turns out to be exceptionally good for online flirting, both sexually and not sexually (like in a friendship way guys!), the game play equivalent of Pair’s ThumbKiss. Draw Something in particular offered, through the act of drawing and guessing, a way for users to open up and bond through the app’s facilitated creativity.

While Song Pop is indeed a little less personal, it also has lower barriers to entry than Draw Something. It offers up five songs in universally known genres like Ultimate 90s, Classic Rap and Love Songs which users race each other in order to recognize first. 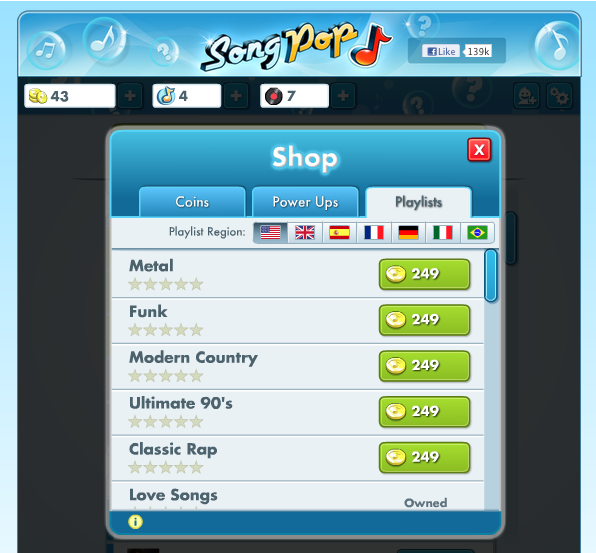 Song Pop in it’s current version is great for smalltalk. It sets up a defined protocol, structure and plan for human interaction. And musical taste is something that humans love to talk about “Oh I hate Kanye!”,”I only listen to indie rock” or “I lurvvvved Pat Benatar!!!” In fact, someone came up to me at a party this weekend and brought up the one (!) game I had played with him first thing.

“We are at the crossroads of the Interest graph and the social graph [with Music],” Nouzareth says, “The game is different based on how old you are. And it brings back memories.”

Whatever the unique confluence of elements is here, the game is so addicting that many hardcore fans theorize that mobile users are able to answer quicker, which also amps up user engagement. For what it’s worth I’m now playing all my games via mobile. The app is currently the number one free Music app in the App Store, and the number 15th in Gaming.

How does Nouzareth think that Song Pop parent company FreshPlanet will avoid the fate of OMGPop with Draw Something, which saw a rapid, much publicized decline in user engagement post-peak and after its acquisition from Zynga, with no second hit in sight?

The competitive element. “Draw Something in terms of traffic is an amazing success,” he says, “But our game is competitive, based on concrete achievements. Even casual gamers like some kind of competition.”

Nouzareth says that he’ll keep ramping up that aspect of the game, including adding new types of playlists and PowerUps (“cheats” to score more points). He also wants to keep building features around Song Pop’s social aspects including a chat system where people can further interact with one another. A premium version of the game with longer clips and more challenges came out today.

In my opinion, the game, which monetizes through in-app purchases, has a real chance at becoming the kind of game that goes beyond gaming. Perhaps it could turn into micro-dating service for people who already knew each other? Other than becoming another Rovio or having Zynga buy it for scale, one has to really think outside the box to see into Song Pop’s future.

For now Nouzareth is emboldened that the game is driving over 100k of those daily users to iTunes in order to buy songs. Find a way to sustain this momentum, while the iron is hot.