Just because Google I/O is over, that doesn’t mean the Google+ announcements have stopped flowing. Yesterday, the company revamped its Google Places iOS app (it’s now “Google+ Local” and includes Zagat integration), and today, it’s integrating Google+ into its Chrome Web App Store. The integration presents itself in a section dedicated to social discovery of new apps, add-ons and games called “From Your Circles.”

Now users signed into Google+ can see which Chrome extensions their friends have recommended –  a metric based on users’ “+1’s,” aka the Google version of the Facebook “Like”. The section offers small, square thumbnails of the Chrome app’s logo and underneath, an indication of which user or users among your Google+ friends have explicitly recommended it via a +1. When you hover your mouse over the app thumbnail, a brief description and an “Add to Chrome” button will appear, allowing you to quickly add the app to your Chrome web browser.

To recommend apps to others both in the store and on Google+ itself, just head over to the app’s detail page then click the +1 located there. 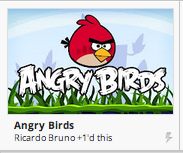 This sort of Google+ integration was hinted at back in April, when a company spokesperson told TNW that Chrome Web Store users would soon be able to see applications and extensions their friends had +1’ed “in the next few weeks.”

The new Web Store integration follows the Google+ integration which recently arrived on YouTube, giving users the option to switch from their YouTube username to their G+ identity.

This is the second notable update to the Chrome Web App store in recent weeks, we should note. Just prior to I/O, Google also added an option that allows app developers to separate app reviews from bug reports in the store. This tweak was an effort to cut down on duplicate bug reports as well as to better highlight the comments about the usefulness of an app in the comments section. Frederic speculated that the feature might later roll out to Google Play, with the Chrome Web Store serving as something of a testing ground. It wouldn’t be surprising to see deeper integration between Google+ and Google Play arrive in the future, too.