When it comes to learning, BenchPrep believes that the most effective educational content doesn’t come in the form of books — or even eBooks. Instead, it’s interactive and cross platform. That’s why the Chicago-based startup is on a mission to build an adaptive learning hub for interactive courses, where students can study content from any publisher, on the Web or on any mobile device. The startup has already released 100 courses, which are being consumed by 250K students, but the team has bigger ambitions — they want to reach 500 courses and one million students within the year.

To help it meet this scale, BenchPrep is today announcing that it has closed $6 million in venture funding, led by New Enterprise Associates with participation from Revolution Ventures. This is BenchPrep’s second round of funding, following the $2.2 million it raised from Lightbank last year, bringing its total to $8.2 million. BenchPrep was one of Lightbank’s first investments and Eric Lefkosky and Brad Keywell continue to sit on the startup’s board of directors. As a result of the round, NEA partner Peter Barris also joins the board.

While reaching 500 courses and one million students by the end of the year may seem an ambitious goal, BenchPrep has come a long way in a short period of time. The startup launched its platform in July 2011 and grew its course library to 100 within 10 months. But the real key to its growth is that BenchPrep now partners with more than 20 of the industry’s top publishers, including McGraw Hill, Princeton Review, Wiley, Cengage Learning and O’Reilly.

Rather than developing its own educational content in-house, BenchPrep licenses material from these textbook publishers, mixing and matching the best content for each particular discipline. Of course, textbook publishers have traditionally been reluctant to partner with newcomers, especially when it comes to licensing agreements, but BenchPrep CEO Ashish Rangnekar tells us that they were able to convince publishers that they were not, in fact, competing for the same dollar.

Instead, Rangnekar asked publishers to think of BenchPrep as distributors — and distributors not of books or eBooks, but of interactive study guides. And as extra incentive, the CEO says that BenchPrep ensures that the royalties for their publishing partners are greater than what they find selling their content through Amazon or traditional bookstores.

What’s more, the fact of the matter is that technology really isn’t in the DNA of these publishing companies, and cross-platform distribution, especially mobile, isn’t something they do well. That’s why BenchPrep has become a sort of a middle man that takes licensed educational content from publishers, turns that material into interactive, gamified courses and study guides, and distributes it across the Web and mobile devices.

That turnaround process can happen in seven days, allowing the startup to convert Algebra and Chemistry textbooks that might sell for $40 or $50 into interactive courses that run anywhere from $50 to $150. For students, this is much cheaper alternative to paying the typical $1,000 or $1,500 for an online course and, for publishers, it’s a nice little source of incremental revenue, thanks to royalties.

Rangnekar also says that it’s become more and more difficult to get students to pay for textbooks and, while they might be more open to shelling out for an eBook or an app, they (like everyone else) naturally expect the price to be lower than a hard copy. If a textbook is $30, for example, they want to buy an eBook equivalent for $10, and, in the app economy, any mobile app that sells for over $5 is practically laughable.

This is obviously part of the reason publishers have dragged their heals in going digital, but BenchPrep is showing publishers that students are willing to pay for educational content — in fact, over 100K of BenchPrep’s 250K students are paying customers — they just want to feel they’re getting the whole course can access it on any device.

It also helps that the startup aggregates all of its courses into a single platform so that a high school student can study for a Calculus or Biology exam using the same interface they would to study for the SAT. Users also get to take advantage of analytics that help them focus on the areas where they need the most work and a sync function that lets them pick up where they left off in their studies — both of which extend across subjects and devices.

In pitching BenchPrep, the CEO tells us that investors were eager to see the startup validate its model in three areas: Ability to source content, that students are willing to pay for the material (that the economics make sense) and that the engagement is measurably higher on mobile than compared to traditional models. In terms of the latter, Rangnekar tells us that two-thirds of BenchPrep’s students access their courses on mobile devices and are averaging 78 sessions per month, while spending an average of nine hours in their courses.

Having been able to validate its model — at least initially — in these three areas, Rangnekar says that (with some relief) the team can now finally turn its focus to solving those interesting learning problems, namely, how to improve the learning experience on mobile (and the Web) to increase retention and performance.

In other words, going forward, BenchPrep plans to focus its efforts on developing better ways to make the learning experience more engaging. Beginning with game mechanics, leaderboards, and social features, the startup partnered with Princeton Review in May to launch GRE ScoreQuest, an iOS app that gamifies the study process for students taking the GRE.

While the audience is obviously limited, the team has been using the app to test the efficacy of social analytics and gamification and will soon begin rolling out select features to all of its courses. 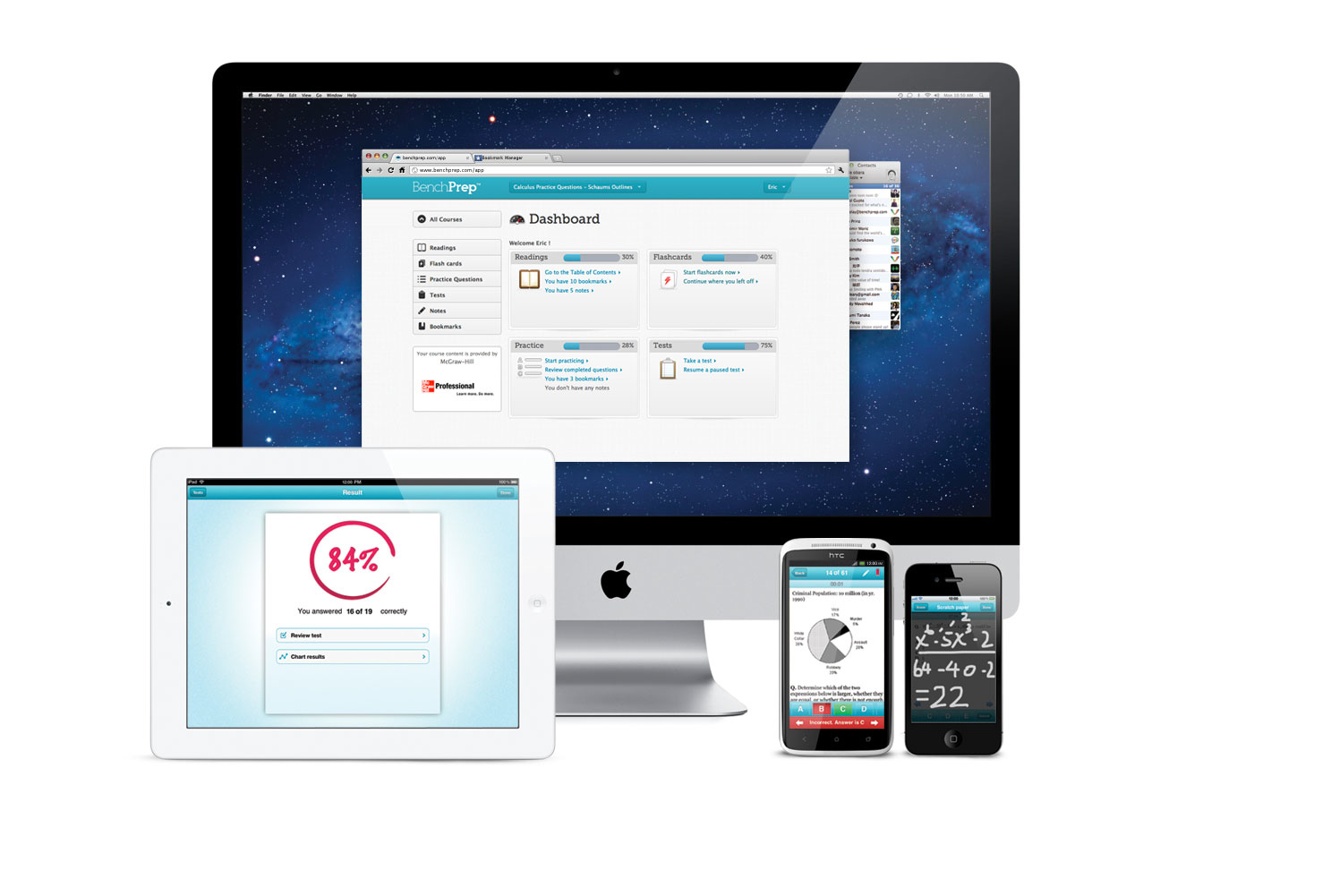