Most banks have begun to provide native apps — or at the very least, mobile-friendly websites — to give users access to their funds and information about their accounts. But when it comes to their investment accounts, few have very much transparency into where their money has been invested, how much they are paying in fees, how their investments are performing and the like. San Francisco-based startup SigFig wants to change that, not just on the web, but now also on mobile devices.

SigFig lets users connect all their various investment accounts — including 401k plans, IRAs, etc. — onto a single dashboard. That gives them the ability to see how their investments are performing in one beautiful visual platform. SigFig originally launched as a web app, but it’s now releasing iPhone and Android apps that will give users on the go all the same information on their mobile devices. 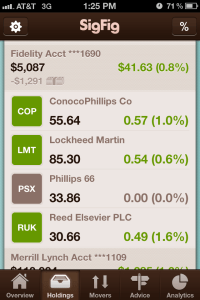 The new SigFig mobile apps have all the same features as the company’s web experience: They provide a view across multiple investment accounts, analysis of the those investments in a dashboard. That includes a portfolio tracker that provides real-time stock, bond, and mutual fund information, as well as detailed charts and analytics to dig down and review performance and allocation of investments. It has push notifications to let users know when stocks are trading significantly up or down, and provides daily and weekly summaries of winners and losers in the broader market.

Having a detailed view of your investment holdings and moving stocks is nice, but it’s kind of useless without getting advice on what to do about them. That’s where SigFig hopes to set itself apart, by providing actionable information designed to help users make informed decisions about how they invest their money. That includes finding funds with lower fees, pointing out under-performing stocks and bonds, and identifying brokers who might do a better job at lower cost than the folks that are currently managing a user’s money.

For SigFig, being on mobile devices was an important step in part because so few users can actually use their smartphones to access information about their accounts. It points out that of the top 100 brokerages, two-thirds don’t have an iPhone app and more than three-quarters lack an app for Android. And even if apps are available for some of their investment accounts, most users have multiple accounts, so getting a full view of their financial health can be tricky. SigFig hopes to solve that problem, by aggregating user information from multiple accounts in a single app.

For now, all app are read-only, meaning that users can log in and view their info, but can’t actually use SigFig for more advanced usage. That means no trading, withdrawing funds, or transferring money within the app. Even so, SigFig believes that with the info it provides, users will be able to better take advantage of their investments, and make smarter choices.