For the past few years, we’ve been told over and over again that NFC will eventually replace the common wallet. And yes, NFC is a great technology. Parts of Europe and China are using it for public transport transactions, and the sharing of content between devices is incredibly cool (just check out this commercial). And moreover, the ability to ditch all of your loyalty cards and combine them in one place (potentially) PassBook-style would be highly convenient. But where mobile payments are concerned, there is no problem to be solved.

Let’s just start with the small stuff. For one, the motion itself should be no different. It’s not like contactless payments via mobile is a more physically efficient form of living and transacting. You grab your credit card out of your wallet in your pocket, and swipe it through the reader (or in some cases tap it, just like the phone). In the case of NFC, you grab your phone out of your pocket, open Google Wallet (or whatever), and tap it to the reader. It’s the same exact motion.

But that doesn’t even matter when we start to consider the real obstacles for NFC mobile payments. There are two issues: the smaller is that, along with not being any faster or easier physically, no one is actually getting rid of their wallet. For one, everyone needs an ID and an ID isn’t safe in a pocket or loose in a bag. So, until I can use my phone as a form of identification at the airport, with the police, or to go to a Dr.’s appointment, my wallet will still remain. And it’s fair to assume that at least some people prefer to have a little cash on them, just in case.

I took a quick Twitter poll using PopTip (a newly launched TechStars company), and it turns out that the few respondents I had mostly feel comfortable without any cash. But, I also assume that the majority of my Twitter followers are generally tech-savvy early adopters, so I still stand behind the fact that you’ll continue carrying a wallet, or some other carrier of small, valuable pieces of paper like insurance cards, IDs, etc.

Moreover, all merchants would need to be set up for NFC transactions to allow the consumer to ditch their wallet, not just forward thinking giants like American Eagle, Macy’s and OfficeMax. It’s not like consumers will stop shopping at non-NFC merchants just because they aren’t set up — paying with a credit card is just as easy, so why even go through the trouble of setting up Google Wallet? Google Offers is a nice incentive, but it isn’t enough to sway all consumers, and it certainly isn’t attractive enough to woo merchants.

In essence, the only true value given to the consumer is the fact that it’s “cool.”

And then the problems intensify when we visit the merchant side of things. There is no benefit to merchants to implement these systems. Sure, Google and Isis can try to convince these SMBs that NFC is the future, but in reality it’s only an added cost to overhaul the system. Even at a minimal cost, the only value is a slight increase in efficiency pushing customers through POS. Companies could potentially market through their POS using NFC, as is the case with Google Offers, though I’m not sure this is welcome on either side. As Mirth so gracefully stated at Disrupt, merchants aren’t quite as enthusiastic about deals services as consumers are. 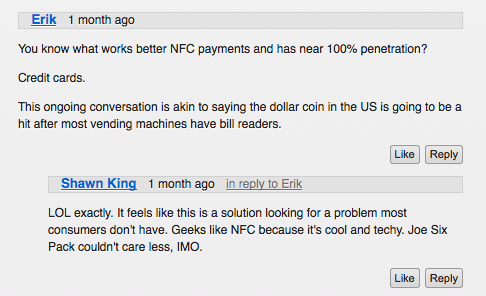 There’s no tangible, proven way to get any return on investment for the implementation. So why do it?

Credit cards are ubiquitous. Credit cards are fast and easy. Almost all merchants have the ability to process payments via credit card. So why? Why are we solving a problem that doesn’t exist?

And even if there is some added benefit, most research predicts that the ubiquity of mobile payments via NFC is between five and ten years away. That’s more than enough time for another disruptive payments solution, likely something that doesn’t require a complete merchant systems overhaul, to supplant NFC before it ever hits its stride.

Again, NFC is an incredibly useful technology. In fact, the social media implications of NFC ubiquity in mobile devices (not at POS) are kind of mind-boggling. Just look at these TagStand figures, and pair them with Google’s recent announcement of 1 million NFC Android devices shipped every week, and then imagine Facebook and Twitter bigger than they’ve ever been before. That is the future of NFC.

Very soon, we’ll be using it in all kinds of interesting and productive ways. I just don’t think mobile payments is one of them.