Poof. Vanished. Gone. Many Facebook users are no longer seeing the real-time news “Ticker” on the right side of their home page, but apparently it should reappear soon. While nothing was posted to Facebook’s Known Issues Page, one Twitter user relayed that his friend who works at Facebook said Ticker “will be back online soon”. There’s a chance the removal could be more permanent, though. Update: And it’s back for some, but not all.

The Ticker is essentially Facebook’s firehose, showing abbreviated stories about nearly every action taken by your friends, no matter how insignificant. If Facebook did remove the Ticker, it could make it harder for third-party apps to grow, but give Facebook more prime real-estate above the fold to show ads.

Reports of the Ticker’s disappearance started trickling into Twitter just before 9pm PST on June 30th, and we’re waiting to hear back from Facebook for official details.

To some it’s known as the “stalker ticker” because watching it can give the feeling of peering over the shoulder of all your friends as they post comments, like photos, read articles, and more. To others it’s the “Spotify Ticker” since the music app was one of the only apps publishing to the Ticker when it first launched at f8 last year. Without other apps mixing their content in, suddenly everyone on Facebook became intimately aware of every song their high school classmates were listening to. 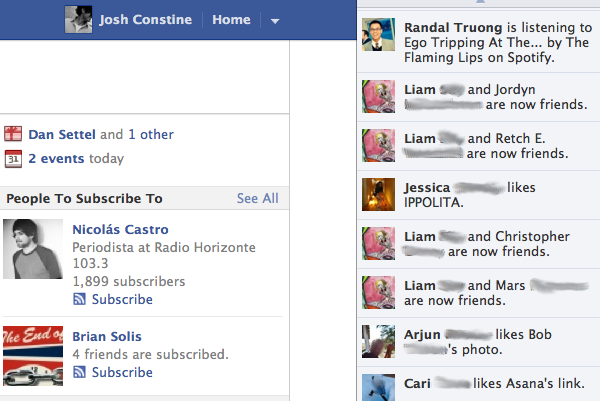 With time as the Open Graph app platform went public and other apps started publishing to Ticker, it refined to show fewer stories about distant acquaintances and more about your close friends. For a story to appear in the main news feed instead of the Ticker, it usually has to receive plenty of Likes and comments, be from one of your best friends, or get aggregated with similar stories like “4 of your friends listened to Japandroids.”

Without the Ticker as a distribution method, apps whose stories are less likely to reach the primary feed than status updates and photo uploads would find it harder to gain new users, which could cut down on runaway growth stories like Socialcam. However, Facebook would gain the extra space in the right sidebar, allowing it to show a full seven ads per page more frequently.

Facebook just never stops changing things ever, so the Ticker could suddenly reappear. The fact that the change was implemented on a Saturday evening Pacific time when most of Facebook’s key markets are away from their desktops is a likely sign that this could just be some maintenance. Ticker entries still appear in the Help Center too. That doesn’t mean it will be around forever of it returns, though. Facebook may be finding the Ticker was confusing people, geting few clicks, and taking up too much room on the home page to warrant its existence.

But power users and frequent visitors would mourn its loss. Without Ticker or a separate Twitter-esque firehose tab in the main feed like there was long ago, there might not always be something fresh on the home page, and we could lose touch with more distant friends. For better or worse, Facebook might not give as intimate a look into the lives of our friends without Ticker, so I’ll be happy to see it return. Update: And it has returned for some.