Editor’s note: Dan Greenberg is the founder & CEO of Sharethrough, the native video advertising company. Dan has been honored as an AdAge “Media Maven” and was recently named to the Forbes “30 under 30″ list. You can find him on Twitter at @dgreenberg.

Over the past ten years, publishers have continued to monetize their sites with banners and pre-roll ads, and advertisers have continued to pump billions into these formats, in spite of tanking performance and near- universal disdain. While click-through rates on display ads started out at around 9% in 2000, they now hover around 0.2% – which means 99.8% of banner ads are completely ignored. Meanwhile, led by YouTube and Hulu, the pre-roll ad market is only shifting in one direction: towards “skippable prerolls,” not forced interruption. And preroll skip rates are only moving in one direction (hint: when you give users the ability to skip annoying ads, they usually do).

As banner clickthrough rates go down and preroll skip rates go up, a new opportunity has emerged for web publishers: native advertising. Native advertising is defined as ad strategies that allow brands to promote their content into the endemic experience of a site in a non-interruptive, integrated way.

Most, if not all, major platforms on the web — Facebook, YouTube, Twitter, Tumblr, and WordPress — have universally adopted “native” advertising formats, in some cases entirely eschewing traditional display banners and interruptive preroll. For these new native ad platforms, borne of a generation of banner blindness and skip buttons, native is the only viable ad strategy. These native ad strategies are built around twin pillars of content and choice, not banners and interruption.

Already, billions of dollars are being spent through Promoted Tweets on Twitter, Sponsored Stories on Facebook, Paid Discovery on StumbleUpon, Promoted Videos on WordPress blogs, and Tumblr Spotlight and Radar (just to name a few). This trend hints towards a native advertising market that’s already surpassed preroll video and is poised to overtake display advertising in the next few years.

As the native advertising market explodes, the framework presented here aims to add a first layer of structure and definition to the emerging medium.

Native advertising on “Closed” platforms is defined by brands creating profiles and/or content within a platform, then promoting that content through visually-integrated, content-driven, choice-based ads within the confines of that same closed platform.

But it appears native advertising on closed platforms is just the tip of the iceberg. Over the past year, content publishers and independent technology companies, not just social platforms, have begun to introduce native ad experiences that reach beyond these closed platforms.

For example, companies like Outbrain and Disqus power recommended content widgets on publisher sites like Mashable and USA Today, which enable marketers to promote their links through native ads.

Companies like StumbleUpon and Devour help users discover great web content, and their advertising models are native to their user experiences: brands promote their videos, articles and websites into the same stream of discovery. In these cases, brands upload their content to a “closed” platform (often YouTube) then distribute that same content into these new “open” platforms with native ads.

At Sharethrough, we’re betting on video being at the center of “open native advertising” as we help publishers generate new revenue with native video ads from top brands. Our platform distributes video content from the likes of Nike, Old Spice, Pepsi, Microsoft, and Nestle across choice-based, native video ad placements to drive views and sharing at scale. Web platforms like WordPress, Cheezburger, and major websites like Forbes, The Awl, ThoughtCatalog, Breaking Media, and Devour have all committed to “open” native video advertising using
Sharethrough.

Native advertising on these “open” platforms is defined by the fact that brand content can live outside of the site, and can be distributed across multiple platforms through native ad formats. Just as the infamous Lumascape frameworks have helped define and evolve the mobile, video, and display ad ecosystems, having a unifying framework is an important step for the native advertising industry to evolve. To that end, introduced here is the industry’s first Native Advertising Framework – a first step in helping the industry understand and define the new native model. It’s very much a work in progress, but it’s a start. Please leave suggestions and additions in the comments. 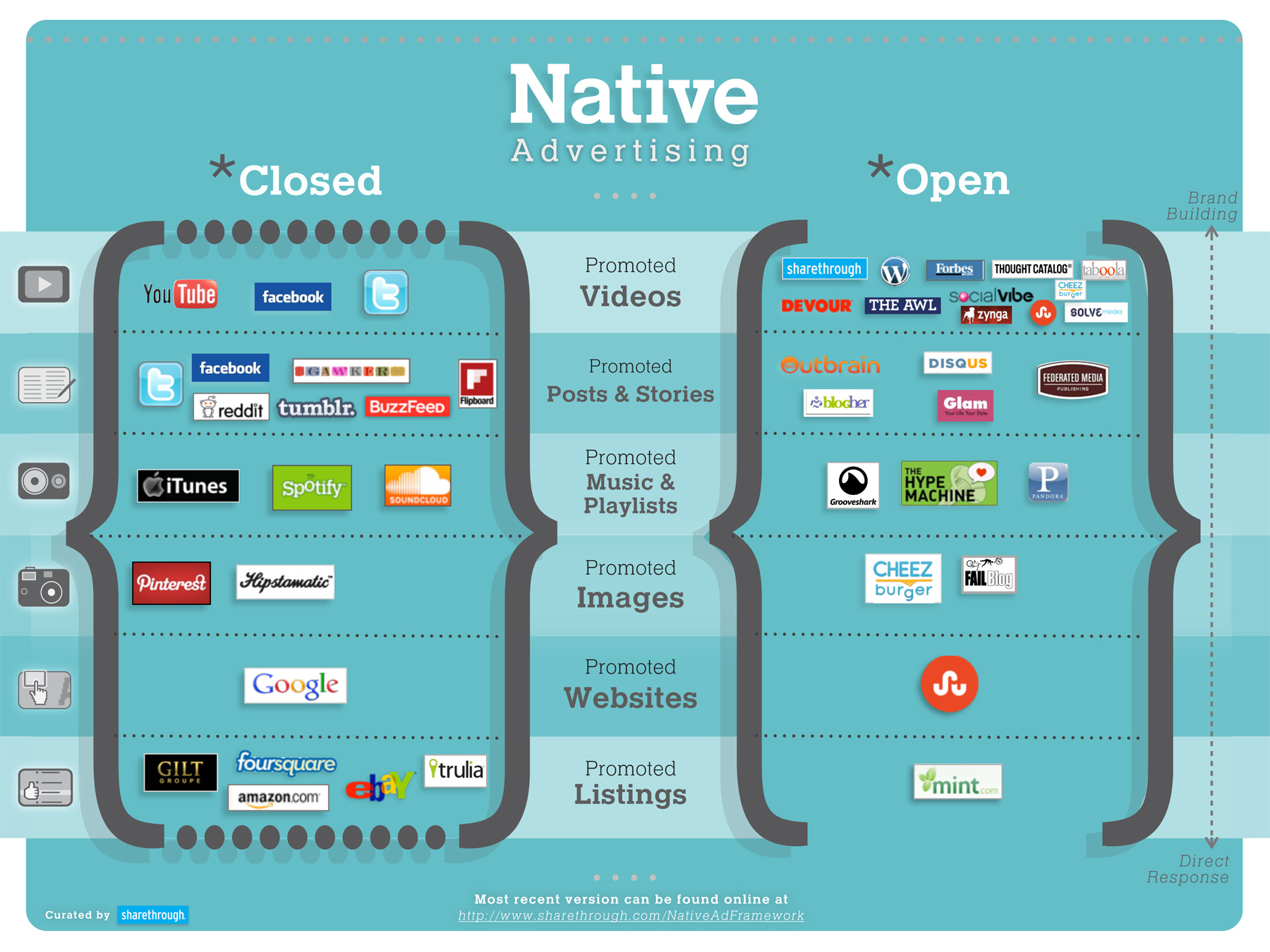 What’s Next for Native Advertising?