Take that, conventional wisdom! The oddball Google Nexus Q is made in the good ol’ US of A, proving that electronics can be assembled outside of China.

This fun little tidbit wasn’t mentioned during the Nexus Q’s announcement yesterday. Sure enough, a label on the bottom of the device says “Designed and Manufactured in the U.S.A.” That little label is also why the device costs so much.

Speaking to the NYT Andy Rubin explained that making the device in the U.S. is a bit of an experiment. “Why don’t we try it and see what happens,” he said. Rubin went on to state that Google is not in a sort of crusade with this project. In fact Google hasn’t revealed the actual Silicon Valley manufacturer nor is it saying where the Q’s components are made.

There was a time when electronics were made in the U.S. Early computer giants such as HP, Dell, even Atari made their products in the U.S. The promise of cheaper labor lured these companies elsewhere. 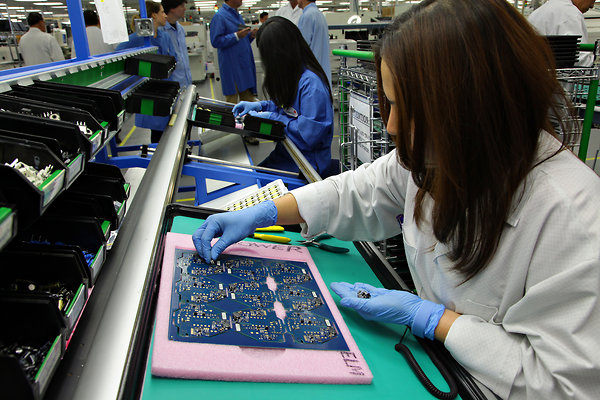 But things are changing again. The cost of labor in China is rising quickly. Plus, there is a large advantage to having your manufacturer literally down the road from the designers. Instead of spending weeks in China, engineers and designers can drive 10 minutes down the road to solve an issue.

The Q itself seems to be a bit of an experiment as well. Google revealed the product yesterday at its yearly developers conference. Basically, the Q is jukebox which pulls media from Google’s cloud services. An Android phone or tablet tells the Q what media to play, and the Q grabs the media from online. This is fundamentally different from Apple’s Airplay service which produces the same result, but instead streams the media from the mobile device itself. The Q is a bit strange, and with a price of $299, it’s a hard sell for what’s essentially a set of features that should be built into Google’s other streaming product, the floundering Google TV.

The Q’s higher price is a direct result of assembling it in the U.S., says Google. The company hopes to drop the price over time as the product volume increases. But the question remains, will consumers, even American consumers, spend $299 on a device with a very limited feature set even if it’s made in the U.S.?

[image via NYT and Wired]