SendHub, the messaging startup that allows businesses to communicate with customers through SMS, is expanding its service today to include support for voice calls and voicemail. These new features put SendHub in more direct competition with Google Voice, as users will now be able to use their SendHub phone numbers to both make and receive phones calls, while keeping their personal cell numbers private. Although the company only has an iPhone application and online service currently, these voice calls can be initiated and received on any device that supports messaging – even on feature phones.

This is an improvement on the previous setup, which only allowed users the ability to accept voice calls, not make them. Voice calls were previously routed to personal cell phone numbers, as Google Voice does today. But now, users of any device, whether a “dumb” phone, Android, BlackBerry, or anything else, can place a call, even if they don’t have a native app installed. They can also text, sending messages to both groups and individuals, using their phone’s SMS.

“Let’s say I have a SendHub number and I want to use it as my work number. SendHub will forward all the messages that come to my SendHub number to my Android phone,” explains co-founder Ash Rust, of how non-native app users can take advantage of the new features. “And then I can reply, and it will reply back to the user just like I was sending it from the SendHub iPhone app or website. And it doesn’t just work on Android phones, it works on any phone that’s text-enabled,” he says. 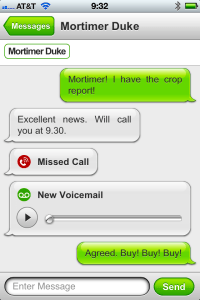 For phone calls, SendHub users just enter the keyword “call” in the message to kick off the call. “When you initiate a call from the SendHub app, we call your real cell phone number,” says Rust, “and when you pick up, we call the person that you’re actually calling from your SendHub number so it’s private.” This, too, is like Google Voice.

The update still doesn’t bring SendHub completely up to par with all of Google Voice’s features, however. For example, SendHub users can’t route certain people or groups to voicemail automatically, nor does it provide voicemail transcription. But some of these are in the works (transcription is coming soon, we’re told). However, Google Voice is 100% free, while SendHub is freemium.

What SendHub does do that’s interesting, though, is that it places all the communications between you and another user in the same stream, including calls, missed calls, voicemails and text messages. “You don’t always check voicemail, because it’s not in your workflow,” explains Rust.

The company also released some new metrics today. SendHub is now sending over 300,000 messages per month, has over 5,000 users (free and paid), and is seeing subscriber growth of 15% week-over-week. When we spoke with SendHub in April, that number was at 12%, for comparison purposes. They’re also seeing high engagement among active users: 25% return daily. And, to date, SendHub’s self-serve revenue (subscriber growth, not counting the businesses getting the “white glove” treatment), is now over $10,000. Says Rust, “20% of our highly engaged users pay us. Once people get engaged, they pay us without us having to get involved.”

Other features in the pipeline include a UI redesign and a much in-demand feature: collaborative sharing between users. This would allow, say, a school administrator to take a partial list of pupils – like the basketball team and their parents – and share it with the coach for use in his or her own SendHub account. The administrator could also specify whether or not that list was read-only or editable.