Google just launched Chrome for iOS and it’s now available in the App Store. Don’t get too excited, though. While it’s a nice enough browser, it’s hobbled by Apple’s rules for third-part developers and doesn’t feature Google’s fast JavaScript rendering engine. Instead, as Google confirmed to us earlier today, it uses Apple’s relatively slow UIWebView to render web pages and that sadly means the browsing experience on iOS isn’t exactly optimal. As expected, the browser feels a bit sluggish on iOS, something that obviously can’t be said about Chrome on any other platform.

At its core, Chrome for iOS is basically a custom interface around Apple’s own rendering engine. What has always made Chrome stand out on any platform is its speed, but that’s definitely not a feature of the iOS version. Don’t get me wrong, there is lots of good stuff in Chrome for iOS – especially if you’re already a Chrome user. It’s just slow (and that doesn’t just apply to page loads – there is often a slight but noticeable lag when you scroll, too). 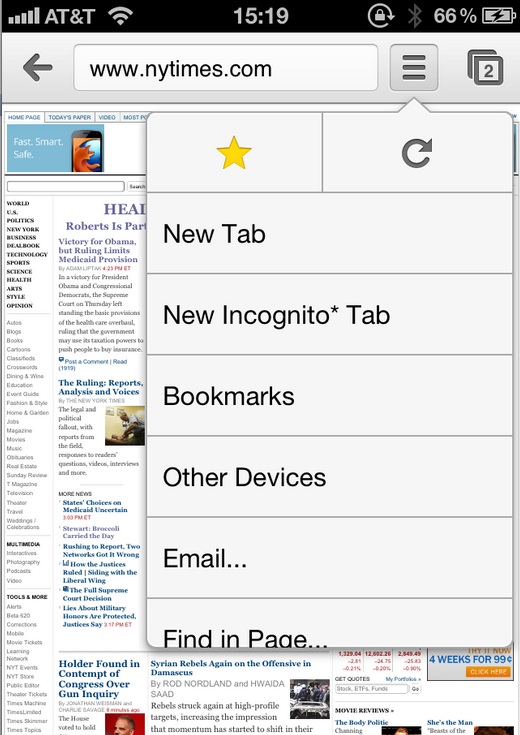 If  you’ve ever used Chrome on Android, you’ll feel right at home with the iOS version. A few icons have moved around, but overall, it’s pretty much the same interface. That is, for the most part, a good thing. Google does a nice job with its new tab page and tab switcher, for example. It’s a very fluid, visual experience that I personally prefer to Apple’s tab switcher.

There are other advantages for those who use Chrome on the desktop already. Thanks to Chrome’s built-in syncing features, all your bookmarks will be waiting for you right after you sign in. Thanks to tab sync, you can easily browse right to the same tabs you have open on your desktop.

For some reason, Google has decided to use a slightly customized keyboard that puts the often-used keys like the colon, comma, hyphen and backslash buttons on top of the usual QWERTY keyboard, together with a ‘.com’ button. This keyboard, by the way, only appears when you are using the native Google search bar in the app, not while you are browsing the web or searching on Google.com.

Overall, Chrome suffers from the same problems every other third-party browser on iOS has to deal with. And besides the rendering speed, the fact that you can’t make Chrome (or any other browser) the default on iOS just means you’ll like be using Safari all the time anyway. Chrome’s interface may be much nicer than Safari’s (at least in my view) and the browser offers quite a few nice features, but from a user’s perspective, that’s probably not enough to make many people switch.

Google’s engineers, though, did what they could on iOS. According to a statement we got from Google earlier today, Google’s “goal was to bring the same fast, secure and stable web browsing experience you’ve come to enjoy when using Chrome on your desktop or Android device, while also adapting to platform specific technical specifications.” Sadly, those platform specific technical specifications dictate that the current iteration of Chrome for iOS can’t quite live up to what we’ve come to expect from Chrome on other platforms.