Well, it appears to be mobile payments day here at TechCrunch. When it rains, it pours, right? Another announcement hitting the wires today comes from global mobile payments startup Kuapay, which has just closed a $4 million round of funding from a single, private investor. The company was started in January 2011 by Joaquin Ayuso de Paul, best known as a co-founder of Tuenti, a company often referred to as the “Spanish Facebook,” which later sold to Telefonica for $100 million.

With Kuapay, the idea isn’t just to create another e-wallet application, but to make using the wallet app a more social and engaging experience, while also integrating customer loyalty programs for merchants.

Kuapay’s wallet app, available for iPhone, Android, BlackBerry and soon, Windows Phone, allows you to store your bank cards, your store cards/rewards cards, and eventually will support any sort of money-storing account, says Joaquin. You can then use the wallet anywhere Kuapay is accepted. In the U.S., its current reach is small. Since the company is based in Santa Monica, California, Kuapay’s first customers are local merchants. There are 40 in total at present, but the company has just signed a deal which will see a southern California KFC franchise piloting the service at 100 locations. 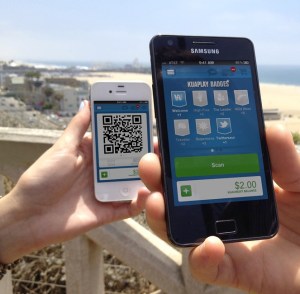 However, outside the U.S., the 35-person company has offices in Chile and Spain, and has been running technical trials there, as well as in Panama, Columbia, and the U.K., with Hong Kong on the way. With the new funding, which comes from a private investor in Chilean technology (but never in tech startups until now), the company is planning to open offices in N.Y., Madrid, and Hong Kong, and will begin to move from technical to commercial trials in worldwide markets, also targeting Brazil, Canada, and eventually, China.

To use the wallet, customers launch a PIN-protected app, which then displays a QR code for the card they want to use. This is then scanned at point-of-sale, but it doesn’t actually transmit the full credit card information during the scan, for security purposes. The company is integrating its technology with some of NCR’s point-of-sale systems, as well as Micros, Aloha’s restaurant point-of-sale, and various others. For POS systems where QR codes don’t work, a one-dimensional barcode is also available. And for even older systems, merchants can choose to use a Kuapay-provided iPod Touch for scanning barcodes or they can enter in a 13-digit number into their POS instead.

In addition to the e-wallet functionality, Kuapay also offers a “gamified,” social wallet experience and associated customer loyalty programs. Merchants can offer punchcard-type programs through Kuapay, as well as send out coupons and offers through the platform. The clever thing here is that the coupons, offers, punchcards punches, and payment info can all be transmitted during the barcode scanning process. Users earn badges from their purchases or by scanning a friend’s barcode, and these badges can be translated into free dollars to be spent in the store, or can be tweeted or shared to Facebook. However, unlike some experiments in the past, these updates don’t detail how much you’ve paid.

Prior to today’s funding, the company had raised $2.5 million from private investors and friends and family.