Over the last few years one could easily say that Google had lost their way. They were no longer known for search. Somehow they’d turned into a company that acquired a series of nonsensical entities, launched half baked products that eventually hit the dead pool or just got into some really weird shit.

But last year that all started to change as the company announced that it would focus on its core products. Hindsight always being 20/20 it all makes sense. It’s like anything else, really. Spitball as many ideas as you possibly can just to see what sticks. And so whether it was by design or not, Project Glass is the future of Google. Not as a product that will make them billions of dollars but what it means for Google as a company and its future.

“The charter of Google X is to take bold risks and push the edges of technology beyond what they’ve been to where the future might be,” Sergey Brin told a small group of reporters during an intimate demo of Project Glass. “We want you to be less of a slave to your devices. It’s been really liberating and I’m really excited to share it with all of you.”

Brin noted that Project Glass is what Google believes could be the next form factor of computing. As it stands now, many of us are willingly beholden to our smartphones with all the web browsing, twittering, pathing, instagramming and whatever else consuming most of our time. Human interaction has all but faded away. The fact that people play the “stacking game” is comical and cute but a sign of how infatuated we are with technology. Glass has the potential to buck that trend by “keeping people in the moment,” said Steve Lee, Product Manager for Glass. Brin also mentioned that Glass shouldn’t be used to fill idle time or to browse the web and that your phone or tablet perfectly fits those needs. 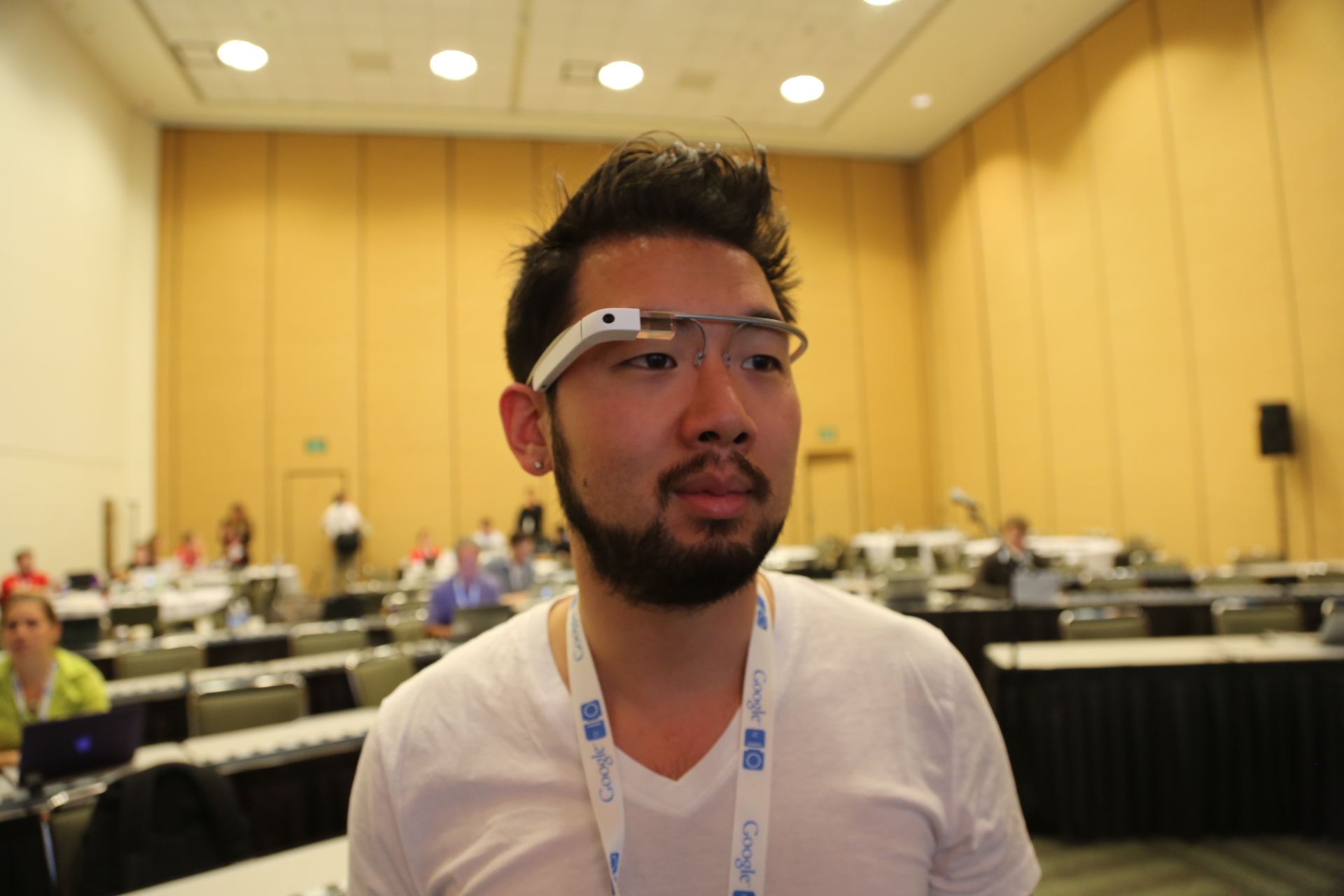 Dorky as they might look, Glass signals the first glimpse of how to integrate such invasive and important technology into our lives in a more seamless way. Isabelle Olsson, the industrial design guru on the team, says the design of Glass ensures “you can look into people’s eyes.” During my brief time with Sergey’s Glass, I can say that the display didn’t hinder my ability to see or look around. The display disappeared until I needed to see what was being shown. I might never have to pull my phone out again to reply to a text, get directions or snap a photo. So, yeah, I’ll deal with looking like a dork but don’t be surprised to see Glass integrated with existing glasses. Brin did mention that Google has been in talks with eyeglass makers and the like. 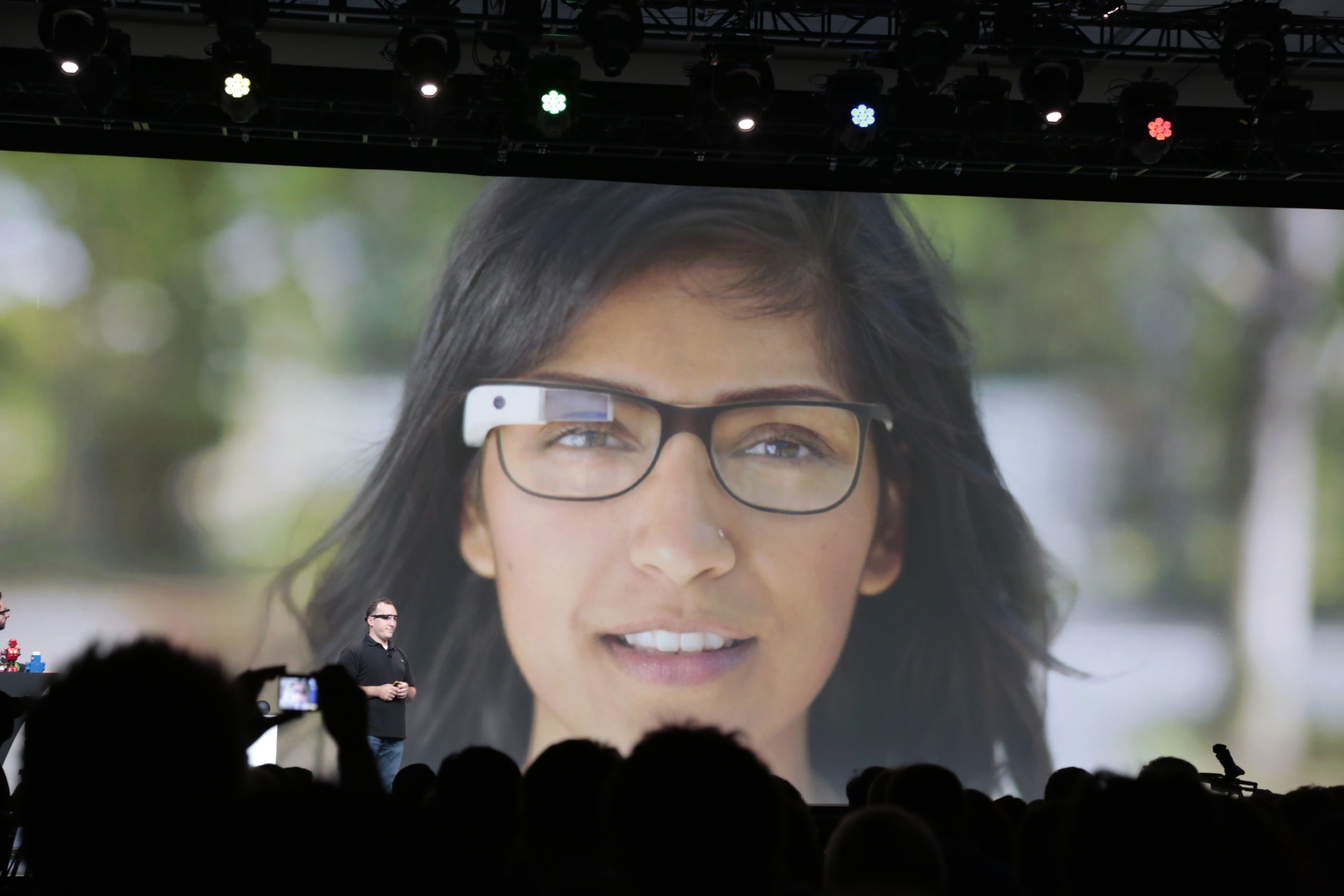 While the hardware is still in prototype phase, I overheard Brin say that he’s experienced up to six hours of juice off a single charge. But that can and will likely change based on usage (uploading photos, capturing video, etc.). Photos, for instance, will be stored locally and can by synced with the cloud later. Both Lee and Brin said that they’re working hard to optimize what data is being transmitted and stored both on the device and in the cloud to alleviate any battery woes. There may be settings that allow users to control the content being shared until you’re within reach of Wi-Fi or when you’ve plugged in your Glasses for the night. Babak Parviz, the head of the Glass group, said a previous build allowed him to query a voice search for the capital of China broadening his own knowledge base to everything that’s available on the Web.

I asked what actually worked on Glass now and Brin politely skirted the question by saying that they’re testing and implementing various features with each build to see what sticks. Facial recognition, while discussed and experimented with, doesn’t sound like it’s been compelling enough that the team wants to immediately integrate it.

Here’s what you won’t see in Glass: advertising. Brin stated pretty vehemently that they have no plans to integrate advertising into Glass and that the only plan is to simply sell the hardware, which will be “significantly” cheaper than the $1,500 Explorer Editions that were announced today. The Glass team says they’re focused on the quality of the experience and not making it as cheap as possible. (Thank gawd.)

Core Google apps like Gmail and Plus (Hangouts) are being tested now along with Android apps. What isn’t clear is whether or not the Android and Google apps teams are working with the team at Glass and vice versa.

So what was the reason for today’s announcement of the $1,500 Explorer Edition of Project Glass? It’s actually a slight pivot from what they’ve done in the past. For once, the typical Google way of pushing out half-done products might work to their advantage. Parviz, Lee and Brin emphasized how important it will be to involve the developer community to further push the platform before Glass becomes available to consumers some time next year. Speaking of ship dates, Brin says the consumer version will ship within a year of when the Explorer Editions ship. Developers will have access to a cloud-based API that is “pretty far along.”

Does this mean Google wants to compete with Microsoft or Apple toe-to-toe? No. Google will always be the weird kid in the corner who sporadically does something mindblowing. They’re not thinking about what’s going on now but what might happen in the distant future. Everything they’ve done up until now seems like a tiny spec of something larger and greater. The late Ray Bradbury said it best: “Life is trying things to see if they work.” And that appears to be what Google is doing.