Founded in 2010, New York City-based startup Jirafe set out with a simple mission: Help eCommerce store managers turn their digital storefronts into viable, thriving businesses. To do so, in the long term, Jirafe hopes to be able to someday automate the many boring administrative and analytical tasks that are part of daily grind of running (and monetizing) an eCommerce operation — so that merchants can get back to focusing on product and customer service.

The startup isn’t quite at full automation yet, but its flexible analytics and intelligence tools are finding an audience nonetheless. To date, Jirafe has attracted over 5,000 merchants in 50 countries, managing more than 100 million transactions for its clients over the last 12 months. Building on this early traction, the startup is today adding to the $2 million seed round it raised in December 2010 with $7 million in Series A financing from both new and returning investors.

Leading the $7 million round were Foundry Group and FirstMark Capital, with additional participation from both FirstRound Capital and O’Reilly Alpha Tech Ventures. Foundry Group joins as a new investor to lead Jirafe’s Series A, while the remainder of the supporting cast are re-upping their investments. As a result of the round, Foundry Managing Director Seth Levine and FirstMark Managing Director Amish Jani will be joining the startup’s board of directors.

The investment makes sense on a number of levels, given Jirafe leadership’s close ties to these firms alongside veteran experience in both eCommerce and advertising. For starters, Jirafe co-founder Scott Switzer is not only a former partner at FirstMark Capital, but he’s also a founder of OpenX, the adtech company backed by $50 million in venture capital, which went from $0 to $100 million in revenue in five years.

In addition, Amit Shah, Switzer’s co-founder, spent over two years as VP of Sales and Business Development at Magento, the popular open source eCommerce platform, where he played a role in the company’s sale to eBay last summer. Unsurprisingly, Jirafe features tight integration with Magento and supports a number of different ways to install the software on the eCommerce platform.

With two founders that have been integral to growing their previous companies into multi-million dollar businesses and with eCommerce coursing through a revolution both at home and abroad, it starts to become clear why investors see plenty of international opportunity for Jirafe.

With its new infusion of capital, the startup plans to invest big in growing its team in New York as well as in London and Paris — the three pillars of online and offline retail. Jirafe has found early traction in France, where it does a large portion of its R&D. Despite its financial crisis, France saw online sales grow 24 percent in Q1 2012, an uptrend that Jirafe is eager to leverage. In fact, the startup already counts PrestaShop, France’s own popular, homegrown eCommerce platform as one of its main partners.

Naturally, the startup also plans to expand its reach beyond the U.S. and Europe. With its new funding in tow, Jirafe plans to begin supporting retailers and partners in Asia and Latin America by the end of the year.

Foundry Managing Director Seth Levine said that, over the last decade, the most successful tech companies have built their businesses at the intersection of big markets. So, by combining data from the converging worlds of eCommerce and marketing to help merchants get insight into which products are converting and which keywords and campaigns are driving revenue in realtime, Levine believes that Jirafe has the potential to make some serious waves. 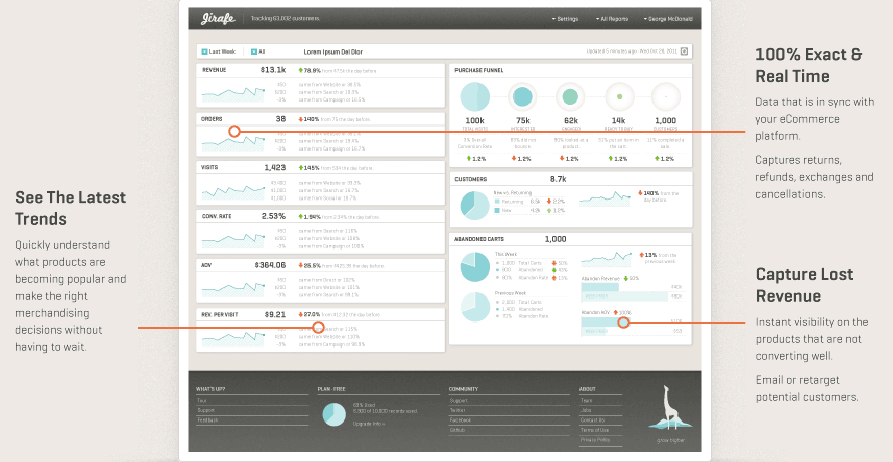