It seems like schools are the one market where Google is having some success with its Chromebook initiative. Today, the company announced that there are now 500 school districts in the U.S. and Europe that actively use Chromebooks. Google also announced a few new districts that have recently decided to use Google’s web-centric laptops, including Rockingham Country Schools, N.C., Transylvania County Schools, N.C., and Fond du Lac School District, Wis.

One of the reasons Google is able to make this push for Chromebooks in education is that its laptops meet the new hardware and operating system guidelines set by the Smarter Balanced Assessment Consortia and the Partnership for Assessment of Readiness for College and Careers (PARCC). 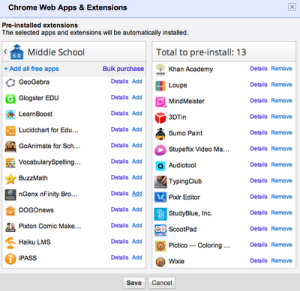 In addition to these deployment announcements, Google is also launching new tools and collections of web apps for students and administrators at the International Society for Technology in Education (ISTE) conference today. The tools, says Google, will “make it even easier to find, use, install and manage web apps for your entire school.” The grade-level application packs are installable from the Chromebook management console and feature apps that integrate tightly with Google Apps for Education. The organization-specific web app collections allow administrators to curate apps from the Chrome Web Store and recommend them to students, teachers and staff.

A number of companies also launched new educational apps for Chrome at the ISTE conference today, including ST Math, VoiceThread and Achieve3000.

In its announcement today, Google says that “in schools, all you need is web.” That’s arguable, but Google is clearly doing something right in the education space, though even with its latest generation of ChromeOS-based hardware, Chromebooks will likely remain niche products for the time being. For schools, however, Chromebooks are attractive alternatives to traditional laptops. The total cost of ownership for these laptops, after all, is relatively low because they are so easy to manage, virtually immune to viruses and update themselves.