Chances are, you have quite a bit of data on your favorite cloud storage service by now. But with the recent changes in this space, especially with Google and Microsoft making a push to compete with startups like Dropbox, what happens if you decide to switch to a different service? Moving data between different backup and cloud storage services is usually a manual and slow task, but that’s where Backup Box comes in. What started as basic tool for moving data from an FTP server to Dropbox has now become a fully-featured backup and data transfer service with support for FTP, SFTP, Dropbox, Box, Microsoft’s SkyDrive, MySQL, and – starting today – Google Drive.

Since its launch, the company, which is based in Edmonton, Canada, has already moved over 12 million files, as BackupBox’s founder Eric Warnke told me earlier this week. Even without a major marketing push, the company is now growing rapidly and getting to the point where it is moving a million files every three days. 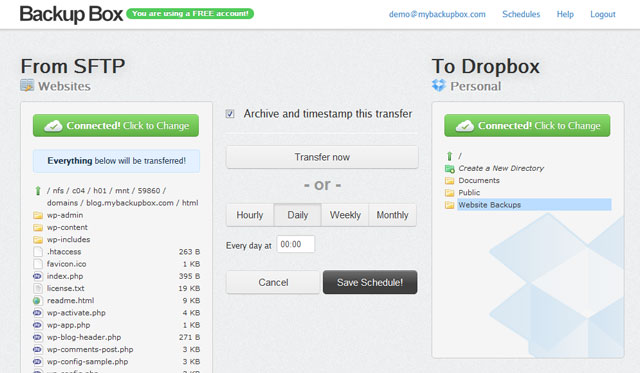 Starting today, you will be able to move data in and out of Google Drive with Backup Box and the team plans to add support for other services, including SugarSync, in the near future.

All of that convenience, of course, doesn’t come for free. Users with free accounts can make 10 transfers per month and transfer up to 1 GB per transfer. Paid accounts start at $10/month for unlimited transfers and a 25 GB/month transfer limit. Backup Box also offers a $99/month plan with a 500 GB transfer limit.