Talk about convergence, eh? The Volt Buckle is described on its indiegogo fundraising page as “The world’s first and only wearable mobile device wall charger.” And as someone who has traveled around the Internet a time or two, I can attest to that claim. Never in all of my Internet days have I seen such a device. I want it.

When worn, the Volt Buckle looks like any ol’ belt buckle. If funded the device will ship with black and brown belts with silver buckles, or for an additional $15, an anodized black or bronze buckle. But when the need arises, simply take off the belt (that could be problem sometimes) and charge a phone through the USB port. The belt buckle portion even acts as a sort of stand when charging.

The creator explains that men, not being a gender that often carriers a purse, only have pockets to store items and thus often leave things at home — like a phone charger. But with the Volt Buckle a charger can always be handy.

The group is looking to raise $60,000 to start the Volt Buckle’s production. Pledge $20 and receive a leather belt minus the buckle. Step it up to $50 and receive a silver Volt Buckle with the anodized version available through a $75 pledge. A bit pricey, yes, but you’ll be the life of any party. Girls dig guys with convergence devices around their loins. 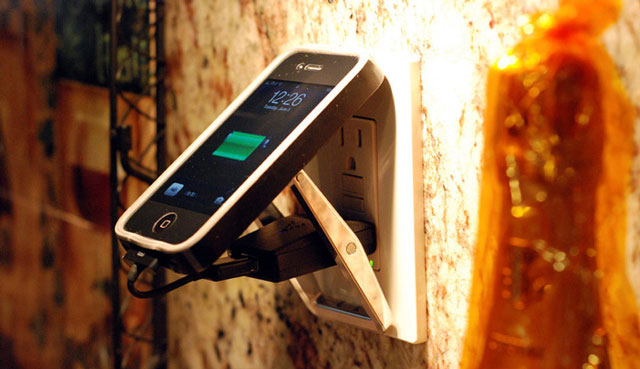