Facebook’s business model just hit a stumbling block, as the social network is being forced to let users opt out of having their likenesses repurposed as endorsements in Sponsored Stories ads. The requirement of opt out controls comes as part of a settlement of a class action lawsuit where five Californians said they did not consent to having their names, faces, and activity used to promote companies who paid Facebook. It could have been even worse, as it appears that these controls will work on an story-by-story basis, and won’t allow users to opt out of all future Sponsored Stories.

The news comes just days after TechCrunch published data showing Sponsored Stories could be the answer to the big question mark of how Facebook will monetize mobile. Sponsored Stories mix naturally into the mobile and web news feeds, but now Facebook will be vulnerable to privacy activist campaigns to get masses of users to opt out of being included in the ad units. Facebook will have to hope few users opt their faces out of its ads.

What Are Sponsored Stories and Why Does An Opt Out Matter?

For those less familiar with Sponsored Stories, when a Facebook user interacts with a business, such as by Liking a Page or Page’s post, using an application, or checking in to a physical business, that business can pay to have the news feed story that could normally appear be shown more prominently or frequently in the web and mobile news feed, or in the ads sidebar to friends. Because they seem like organic content, and feature the faces and names of friends as an automatic trusted referral, they’re clicked more often and are more influential on viewers than traditional ads. 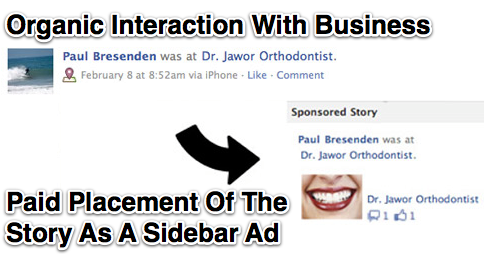 The issue is that California law protects citizens from unauthorized use of their likeness for promotional purposes. Those likenesses are exactly what make Sponsored Stories so powerful, but Facebook does not currently offer any way to opt out of being shown in them to friends.

This isn’t really a privacy issue, as all Sponsored Stories are based on organic content that friends could see anyway. But many people disapprove of how Facebook uses their personal data to power ad targeting, they may be quick to exercise the option to avoid being used in ad creative.

If Facebook is lucky, only a small percentage of users will do so. But sadly it will pit its interests directly against users who want to opt out, as will be trying its best within the legal bounds to bury the opt out option. Since the controls must be “easily accessible” I expect they’ll appear in the Activity Log that’s linked to in everyone’s Timelines, rather than in the Account Settings. 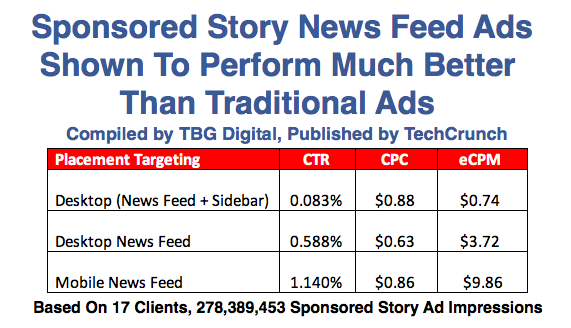 The Changes Facebook Has To Make Now That Could Hurt Business

You can see the full court document, spotted earlier by Reuters, embedded below but here’s a summary of the case’s outcome.

Facebook will pay $10 million in cy pres that will go to advocacy for people’s right over their use in publicity on the Internet. Facebook will also pay the plaintiffs’ attorneys’ fees and costs up to $10.3 million, plus $37,00 in compensation directly to the plaintiffs. 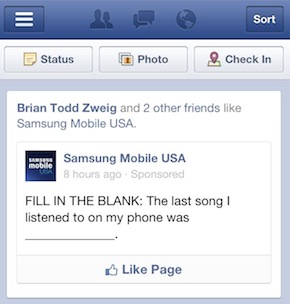 Though redacted in later court documents filed by plaintiffs in support of the settlement, an expert hired by the plaintiff quoted that the changes have the estimated implicit value to the plaintiffs of $103.2 million. Depending on how prevalent the controls are and how frequently with engage with them to opt out of Sponsored Stories, the lost revenue for Facebook could be around that value or more.

However, if Facebook is required to give users the option to opt out of future Sponsored Stories, not just ones based on their past actions, the changes could significantly derail Facebook’s mobile business model that hinges on Sponsored Stories by denying or drastically reducing its ability to monetize whole portions of its user base. In this case, privacy activist groups like “Europe vs. Facebook” that have been a thorn in Mark Zuckerberg’s side could rally users to permanently opt of Sponsored Stories en masse.

Update: Closer inspection of the terms of the settlement shows that Facebook will only have to show opt out controls for user actions that have already been turned into Sponsored Stories, not just ones that could be. This also seems to confirm that Facebook will not have to offer forward reaching opt-outs to prevent future actions from being turned into Sponsored Stories, which means this settlement is less dangerous to Facebook’s longterm business.

Facebook has been trying to fight the case with a series of motions to dismiss, but at some point it should have considered voluntarily making all the changes except the detrimental opt out feature. Now it will spend years trying to bury the controls and hoping no one notices or talks about them, lest users flock to shutting down their inclusion in Sponsored Stories. And considering the how many news outlets sensationalizing privacy issues to score page views, you can bet the press will make it hard for users to forget they can take a bite out of Facebook’s bottom-line whenever they want.

A Closer Look At The Settlement

Here is the exact wording from the settlement regarding the opt out controls Facebook will have to add. They appear to only concern past actions and not require an all-inclusive forward-reaching opt out that could be more detrimental to Facebook:

And here is the full text of the six terms of the settlement:

And finally, here’s the full court document detailing the settlement: