“This is epically important,” tweeted Wikipedia co-founder Jimmy Wales, about a new simplified editing platform aimed at massively expanding the number of people who contribute to the online encyclopedia. A deceivingly tiny percentage of users actually contribute to Wikipedia, despite the foundation’s earnest attempts at making it an inclusive, democratic creation of mankind (estimates put the active contributor base at around 0.7%, who make up 50% of the entries).

Wikipedia blames the difficulty in learning its confusing text editor for the reason the active community of editors sits around a paltry 500 contributors. “We identified the difficulty in learning wikitext as a key inhibitor to growing our editor community in the Wikimedia movement’s strategic plan,” the company writes in the announcement of the new simplified editor. “We want the process of learning how to edit to be trivial, so our volunteers, both new and experienced, can devote themselves to what they edit. That’s why we’re building the visual editor, so that contributing to a wiki is as easy and natural as other modern editing systems, and new editors are not dissuaded from making their changes.” 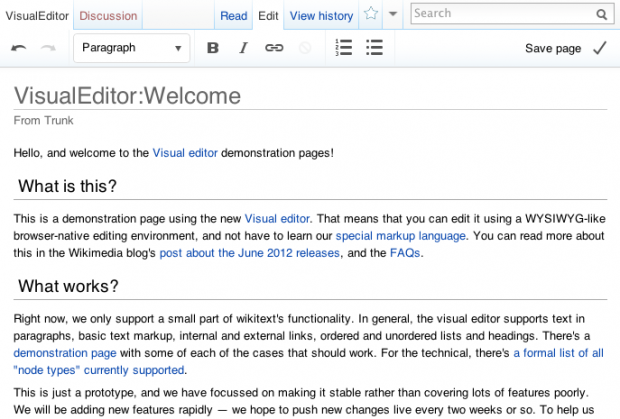 From what we can see, the new simplified editor delivers on its promise: editing an entry feels very much like writing an email or Google document, with a few simple font buttons up top. You can check it out for yourself here. Have you ever wanted to contribute to Wikipedia, but were turned off by the text editor? Share your stories below about why you do, or do not, contribute.