Cabulous, a San Francisco-based taxi dispatch technology startup, tells TechCrunch it has raised $8 million in new funding to scale out its service to fleets of cabs worldwide.

The new funding, which serves as Cabulous’ Series A, was co-led by RockPort and Shasta Ventures, with follow-on participation from angel investors including Sand Hill Angels and members of the Band of Angels. Previously the one-year-old Cabulous was backed by around $1 million in seed funding, so this brings its total investment to about $9 million. Cabulous, which has 15 full-time staff, is also announcing the appointment of Silicon Valley tech veteran Mark Towfiq as its CTO.

You can watch the video embedded above to see my interview with Cabulous CEO Steven Humphreys to get the full rundown on what Cabulous does and how the new funding will be put to use.

I’ve personally been a big fan of Cabulous for months now. The app, which is available on the web, iOS and Android, is super straightforward: It shows you a map filled with little moving icons of the available taxicabs in your area. You digitally “hail” the cab you want to take by clicking on the icon and entering your phone number and exact address. You can pay for the cab the old-fashioned way (in the car) or through the Cabulous app using your credit card. 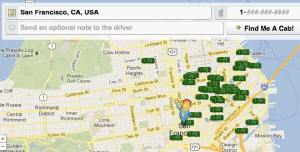 It’s totally free on the consumer side — Cabulous makes money by selling its service at the taxicab fleet level as a subscription, and it provides stripped-down Android tablets and mobile phones that cabbies can install in their vehicles to run the app. Humphreys tells me that cab companies love it because it cuts down on their costs of running telephone dispatch services, and cab drivers love it because it gets them more customers (Cabulous says it helps drivers increase their monthly income by 20 percent on average.) Something like 50 percent of all cabs are empty at any given time, so there is a ton of efficiency to be gained by plugging them into a digital network.

A Space That’s Heating Up

Of course, Cabulous is not without competition. A Europe-based company named GetTaxi recently snagged $20 million in funding that it plans to use to expand into the United States, while on-demand car service startup Uber has started to dabble in the regular taxicab space. Humphreys tells me that while he thinks there is more than enough room for several players in the market, Cabulous is uniquely positioned because of its patented dispatch system and the way that it addresses the industry at the fleet level, rather than through individual drivers.

Cabulous has 1000 US taxis in its fleet today (more than 200 of which are in San Francisco) and is processing 100,000 rides per month, so it already has a very strong foothold. It’ll be cool to see how much it grows now that it is backed by serious funding.