Less than a year after its $1 million seed round, Yesware has closed a $4 million Series A for its productivity platform for salespeople. The new round was led by IDG Ventures and saw participation from seed investors Google Ventures, Foundry Group, and Golden Venture Partners.

The company, which makes a suite of services that work in Gmail and on mobile, offers an alternative way to input to CRM systems and integrates with professional CRMs like Salesforce.com, Microsoft Dynamics, Oracle CRM, Highrise and others. However, Yesware can be also be used as standalone product by smaller businesses or individuals.

Included in the suite are email templates for reaching out to customers and prospects, an email tracking system that lets salespeople know when their messages have been read, reports and analytics that track things like email opens, goal progress, details on prospects and the dollar amount associated with them, and more. It can also help prioritize email conversations by customer engagement, so salespeople know which prospects they should be talking to more. 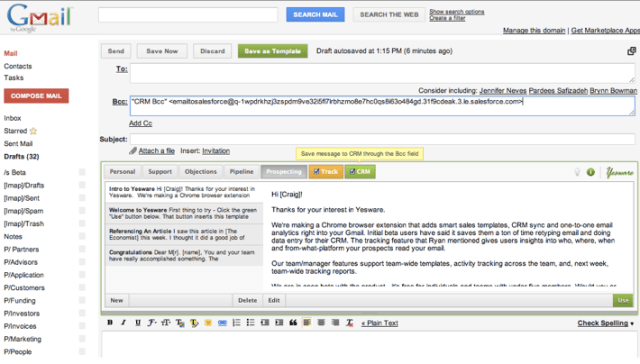 “One of the big problems with CRMs is getting the data in, and getting the quality of the data in” explains Yesware founder and CEO Matthew Bellows. “All CRMs are basically manual data entry – and by making data so manual and time-intensive, it really degrades the quality the enterprise then gets.”

So with Yesware, he says, the idea is to make CRM entry less reliant on manual data input, and more based on activity. This makes the data more reliable, more accurate and more timely. But, Bellows points out, what makes Yesware unique is that it’s not just focused on creating a better way to input into CRM systems – the most important goal the company has is helping salespeople be more successful. “If we can help them be more successful, everything else will follow,” he says.

Today, Yesware works as a Chrome or Firefox browser extension that customizes the online Gmail experience, and it also offers some functionality available as an Android app. With the new funding, Yesware will make improvements on Android, and introduce an app for Outlook. The Outlook launch is most critical, as 95% of salespeople use it, Bellows notes. (That may be a slight exaggeration?) Also on the company’s roadmap are iOS and tablet apps, and eventually, other tools that fall outside of email productivity. One concept, for example, is an app focused on doing follow-up calls, where salespeople could keep a prospect list and leave templated audio messages when they reach voicemail.

The company also announced today that it now has 40,000 salespeople using the product, including companies like Yammer, Hubspot, AdRoll, as well as earlier customers KISSmetrics and StackOverflow. The freemium service is really affordable, too – if you reach the limits, you can get more free usage via social sharing, or you can opt to pay $5/month.  The challenges, however, in building on top of Gmail or Outlook, for example, is that Yesware is not in charge of the platform it’s based on – one change on the email providers’ side can break the whole Yesware experience. (Incidentally, the original idea back at seed stage was to build an email platform for salespeople, but costs were too high. How sad.)

In addition to funding product developments, Yesware will be using the new infusion of capital to grow its team of eight to fifteen by year-end and move from Cambridge to Boston.