Swype lovers, Nuance has some good news for you. The company just released a major update to the predictive keyboard software, even going as far as calling this update the next generation of Swype. And after looking at the new feature list, that often overused phrase is probably accurate this time.

Chief among Nuance’s tweaks is a new take on the Swype keyboard. It still does the quick swiping input, but users can also now peck at the keys, triggering Nuance’s smart XT9 predictive text. Users can also simply write letters, words or symbols with their finger tips. After a long beta period, Nuance has also included a Dragon button on the Swype keyboard allowing users to simply talk to their phone.

By building in XT9, Swype now features Nuance’s best predictive text software but the alternative keyboard also now sports its own personal dictionary. Swype picks up and learns words pecked out on the keyboard or through voice over time Plus, you can have Swype grabs words from texts, emails, and other user-inputted activities. 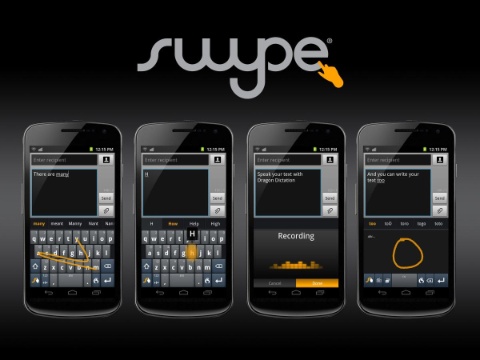 Nuance didn’t waste anytime after acquiring Swype late last year. The company quickly added several beta functions including voice input and more languages. This is one of the biggest updates to date for Swype. The company has come a long way from launching on TechCrunch 50’s stage in 2008. Swype built an incredible product and it seems Nuance is committed to the same goal. The version will hit devices through OEM updates or users can download it from beta.swype.com.