Fotopedia, the company best known for it’s travel-focused iOS photo apps, launched its new ad model for the iPad today that will allow advertisers to buy highly targeted ads to its over 12 million users in more than 120 countries. The company, which recently updated many of its apps for the new iPad’s Retina display, says that it’s regularly seeing 10% click-through rates for the ads its featuring in its apps. Fotopedia launched and tested this new model with Flipboard, Jetsetter and National Geographic as its first advertisers. 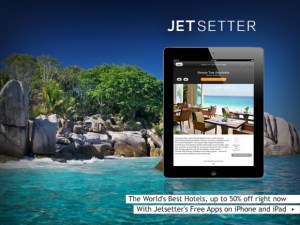 Advertisers will be able to target users based on geography, their interests, device (iPhone or iPad) and language (English, Chinese, Japanese, Korean, German, Spanish and French). Jean-Marie Hullot, Fotopedia’s CEO and a former Apple executive who worked with Steve Jobs at NeXT and Apple until 2005, notes that 60% of the company’s traffic is now generated on the iPad. The company’s apps, he also stressed, are very popular in China, Japan, the U.S. and many European countries. Last month, the company also announced that it now gets over 250,000 visits per day and 200 million image views per month.

As for how successful these new ads are, National Geographic Traveler’s editor-in-chief Keith Belows says the company’s Fotopedia campaign results in “tens of thousands of downloads” in just three days. 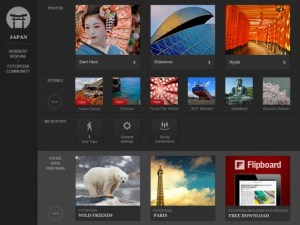 The ads themselves feature the kind of high-end photography that Fotopedia has become known for and are generally nonintrusive. Fotopedia suggests that advertisers set a budget around $10,000 to $20,000 per week for their campaigns.

Since its launch, Fotopedia has made a slight pivot away from the coffee table book-like large apps it used to produce to smaller and more focused magazine-like apps that are regularly updated with new content. This more focused approach to the apps is likely also helping the company to reach more targeted audiences and the regular free in-app updates are getting users to look at the apps 4.5 times per month.