The rise of social media has been like the emergence of a new and powerful drug. But the the Facebook newsfeed and Twitter stream, despite being addictive, don’t really serve the needs of people who want to keep a conversation on one topic. Have you tried following a decent conversation on a hashtag? Yeah, that. And the old fashioned topic-based bulletin boards are just not real-time enough and too anonymous.

One person who knows this more than most is high profile UK MP Louise Mensch, who has masterfully used twitter both to propel her political views (at 60,000 followers she is in the top 10 of all UK MPs) but has also felt the full backlash of the Twitter trolls. It was experiences like this which got her thinking late last year – why not create a platform where we can still have open conversations but stay on topic, still in real-time? Thus Menshn is launched today: a full-blown social platform for “talking on topic” in a realtime, social manner where – Mensch hopes – quality will out.

And this is no trivial project. Mensch has teamed up with a former digital guru for Labour under Tony Blair, Luke Bozier, who has built the technical platform for Menshn. Initially the site launches in the US-only. Try to access it from the UK and all you will see is a holding page. Something which is going to frustrate a few UK politics junkies. 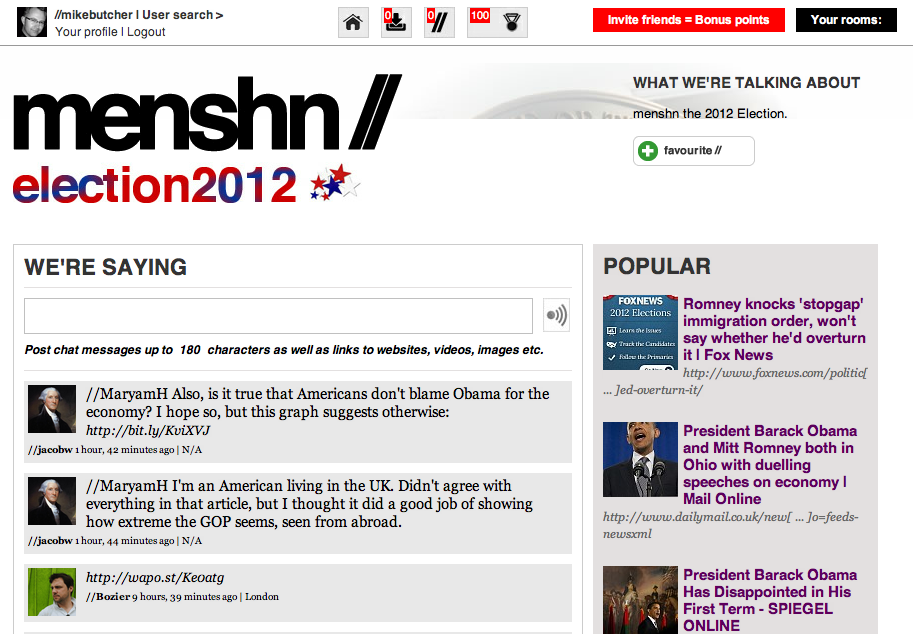 Instead, Menshn is going to be initially aimed at the massive topic of conversation around the US elections.

“I had a brainwave over Christmas about Twitter hashtags and the frustration of following one topic, especially in politics,” Mensch told me in an exclusive interview.

“Then I got my husband on Twitter [Peter Mensch is the manager of heavy metal band Metallica, among others] and although he liked following people in the music industry and what they had to say, he hated the mundane tweets about people having breakfast. He wanted something on topic.” 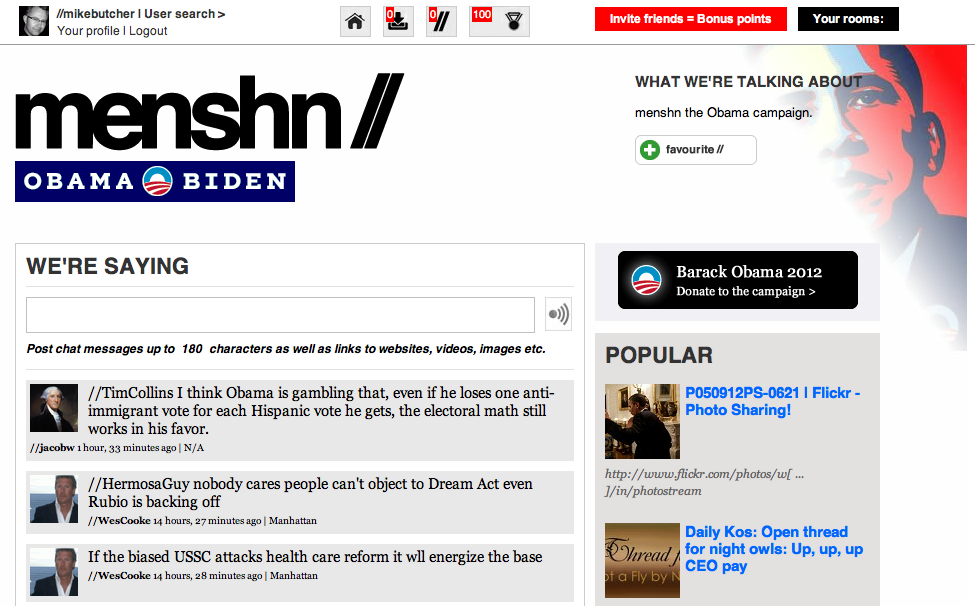 Mensch pitched the idea of of a sort of ”topic-based Twittter’ to Bozier and Menshn was born. They decided to focus on politics first, and then expand to other topics.

Menshn will launch in the UK just before the London Olympics. After that new categories will be added based on demand – this will avoid the problem of low-quality, spam-filled topics being set up.

After being given early access I realised I’d seen something similar. Live blogger sometimes use Scribble Live, and Menshn has that live, collaborative feel to it. However, in design terms it is far and away better looking. 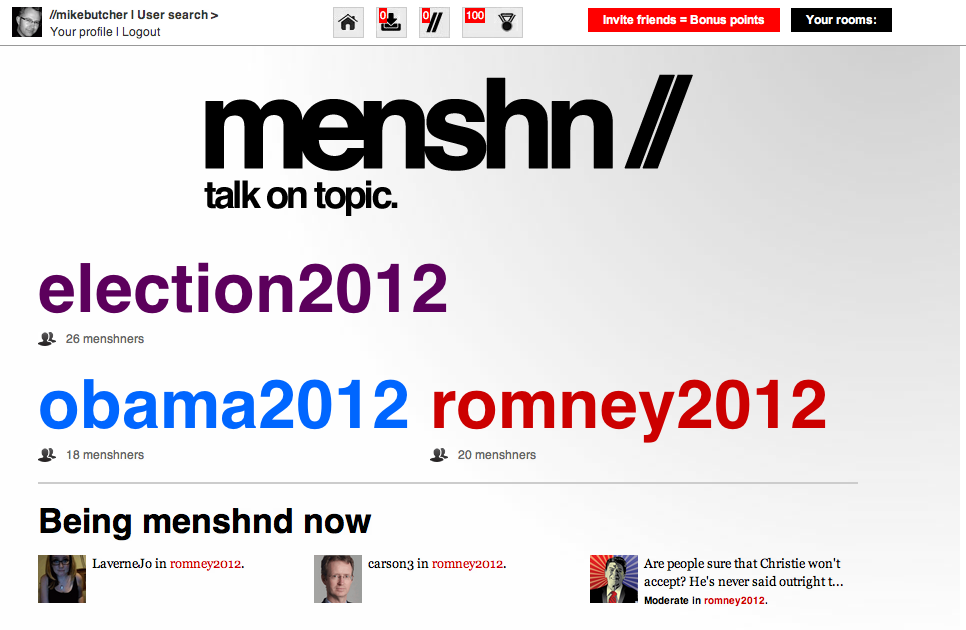 So far there are just three topics. The US elections, a chat room for Obama’s campaign and one for Romney’s. You can donate to the Obama or Romney campaigns and popular or trending areas of the site get prominence on the home page.

More channels will be rolled out later. “We’ll have a nomination process and meet the demand for channels,” says Mensch.

The user experience is Twitter-like in its simplicity.

You go into topic and can contribute to a live chat. User can rate another user “up” (you can’t rate people down), thus creating social capital for the best talkers on the site. There’s a system for reporting/flagging bad or rude contributors for moderation but Bozier and Mensch say they will be avoiding getting into the heavy moderation game. And right now they are only a team of two anyway.

‘Gamificiation’ is present in the platform. The top 5% of the most highly rated rated posts on the site will be automatically seen by everyone in the chat room. You get 1 point for each ‘rate’ on one of your “menshns”, 5 points if someone subscribes to you, 5 points when you ‘favourite’ a room, 10 points for each friend you invite to the site, and there will be random bonus points every Friday.

Private mode is available allowing only people you follow to see your activity.

And unlike when you join Twitter and have to work out who it is you want to follow, when you join Menshn, your account automatically follows 100 of the most highly rated people on a topic so you get to see a “stream” immediately. 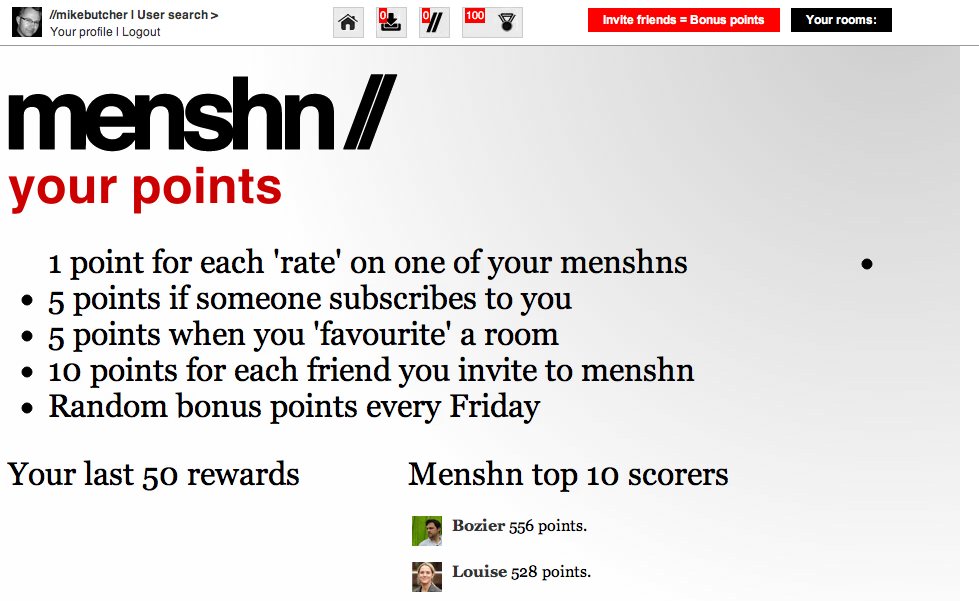 Again, unlike Twitter, there is no Retweet function or ‘mentions’. Instead you are encouraged to contribute properly – though there is a messaging system similar to Direct Messages on Twitter. You also do not have to be ‘in a room’ to post into that topic.

It gets more interesting when you see what can be done on Menshn in terms of a personal account, and what might be done with brands.

For starters, users get their own personal room (the feature can be enabled or disabled), so people can talk about YOU (if you want). This might come in handy for Mensh’s surgeries, she jests. BUt the most likely application will be for high profile people and celebrities. 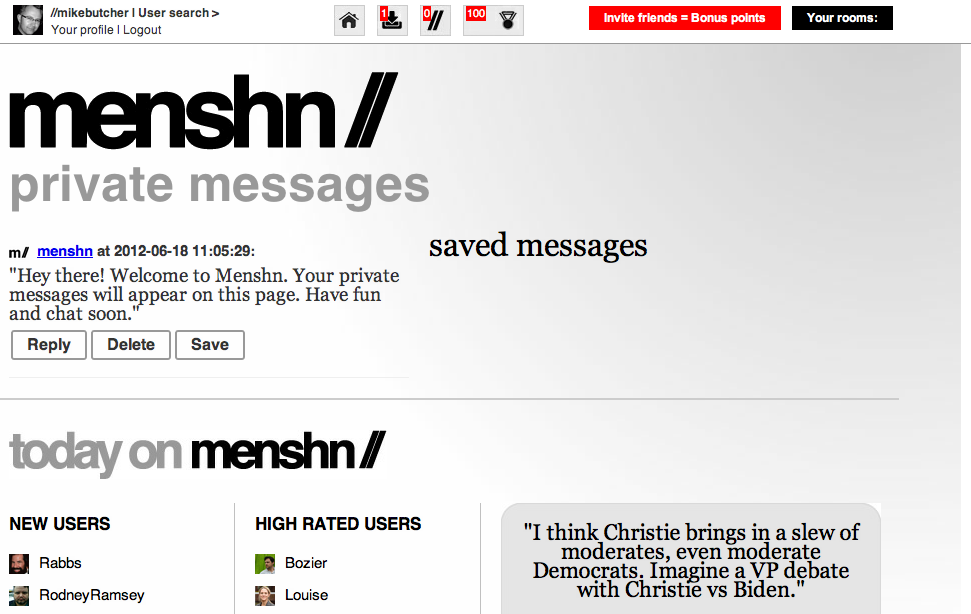 More interestingly, a brand like Starbucks might be able to get Menshn.com/Starbucks and have a live realtime conversation around their brand, without needing to deal with the madness of Twitter. This is not announced yet but Mensch and Bozier made it clear it’s something they are thinking about.

There’s also the possibility for place-based live chat around, say a city, or media brands like the X-Factor, music artists, you name it.

“We’re launching this with the faith that there is a giant gap to fill in topic-based social media,” Mensh tells me.

But it’s also potentially a good business. “Mensch Bozier Ltd” has been created to run the new company, and, says Mensch, venture capitalists they have talked to are talking a keen interest in whether the site will take off.

But to start out with a huge topic of discussion such as the US elections is probably very smart in terms of Menshn’s potential as a platform.

Will we be “Menshn-ing” conversation in the future, as well as Tweeting each other? We’re about to find out.