Google is still by far the most dominant search engine in the U.S., but in the last year it actually lost some momentum while Yahoo and especially Microsoft’s Bing both saw increases, according to figures out today from Experian Hitwise, and bolstered by separate numbers released yesterday by Compete, with both calculating searches between May 2012 and May 2011.

According to Hitwise’s figures, Google accounted for 65.02 percent of all U.S. searches conducted in the four weeks ending June 2, 2012, compared to 68.11 percent in the same period in 2011 — down by 3.09 percent, or a percentage change of negative 5 percent.

Meanwhile Bing-powered searches accounted or 28.12 percent of all searches for the last month, up 1.33 percentage points or a rise of 5 percent. Yahoo’s share was 14.95 percent and and direct Bing searches were at 13.17 percent, increases of 3 percent and 7 percent, although in real terms about .5 percent for Yahoo and nearly 1 percent for Bing.

In a sign of yet more consolidation among those three players — AOL for example does not get singled out — Hitwise says that there are another 65 search engines that it ranks, but that they only accounted collectively for 6.86 percent of U.S. searches. 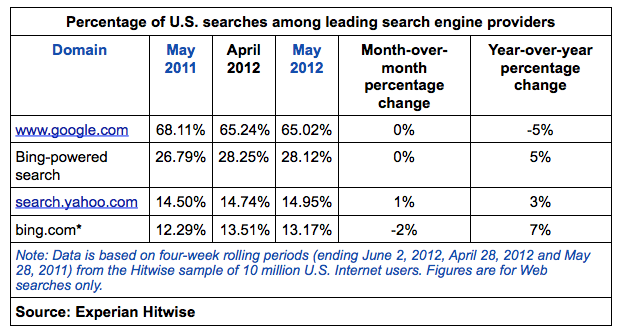 Compete’s figures as you can see below actually give Google a slightly higher market share for the last month, with 65.5 percent of all searches, but its calculations also indicate that it is actually dropped by more over the last year — 3.9 percentage points for Google-powered sites, and 3.7 percentage points for Google-direct searches. (Hitwise doesn’t single out Google-powered.)

Compete also still details AOL in its list: it accounted for a mere 0.8 percent of all searches — flat on the previous month but down slightly on one year ago.

Neither Compete nor Hitwise offered an explanation as to why Google’s seen a decline but for Microsoft and Yahoo’s parts, the two have been working hard to make sure they do not give any more way to Google. Microsoft, for example, has been creating special programs, such as its TangoCard reward program, Bing Rewards, which gives credits for gift cards, nonprofit donations, and other digital goods everytime a user visits. The idea is to work loyalty and repeat business into people’s people’s search engine preferences: users of Bing Rewards will return to their site instead of another for the next time that they look for news, strange pictures of cats or whatever else they want to find.

One other interesting detail: Hitwise is noting that one-word searches are way up on longer strings — they saw a 19 percent increase while all others went down. The influence of Twitter? Or perhaps search engines just getting that much more sophisticated. 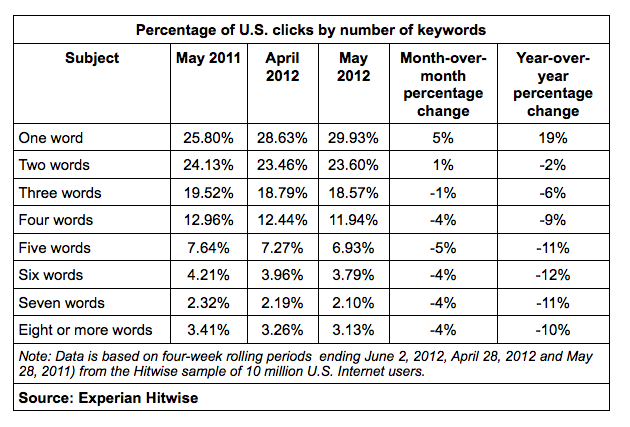