Web traffic from the Apple iPad saw a slight drop in early June, according to new data from the Chitika Ad network, which analyzed a sample containing hundreds of millions of impressions to arrive at its conclusions. In May, the iPad had accounted for 94.64% of all tablet web traffic, the company previously reported. Today, the company says the iPad has dropped to a 91.07% share. However, the iPad still has a wide lead over its competition, so the change is fairly negligible. Among the non-iPad tablet devices, the top tablet was the Samsung Galaxy Tab, with a 1.77% share of traffic, for example.

Meanwhile, the Barnes & Noble Nook overtook the Kindle Fire in tablet traffic share, now accounting for 0.85% of tablet traffic versus the Kinde Fire’s 0.71%.

Analysts at Chitika speculate that B&N’s new advertising campaign and launch of the new Nook Simple Touch reader (the one with the glowlight) could have had an indirect impact on Nook sales, and that even though the Simple Touch doesn’t support web browsing itself, Nook has benefitted in an increase in brand familiarity via its Simple Touch ads. However, given that the time frame for the study (June 4th through 10th) is so minimal, it’s hard to read too much into these conclusions just now. Take them for what they are – a single source’s spot check on tablet traffic. It’s something that paints a better picture over time, than it does in the moment. 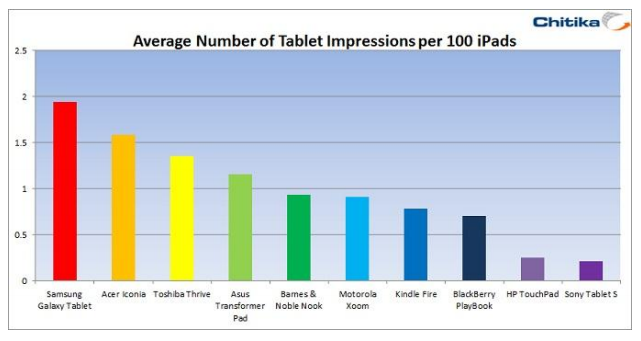 That said, neither the Nook or Kindle ranked in the top of the (non-iPad) charts this go around. Instead, the leaderboard began with the Galaxy tablet, followed by the Acer Iconica, Toshiba Thrive, then Asus Transformer before reaching the Nook. The Motorola Xoom was also ahead of the Kindle Fire, the latter which only managed to beat out the BlackBerry PlayBook, HP TouchPad and the Sony Tablet 5.

I particularly like how Chitika has to leave the iPad out of its chart visualization altogether (pictured above), so we can even spot the differences between all these other tablets.