Seattle-based startup PetHub just closed its seed round of $1.3 million from angel investors (including PetHub founder Tom Arnold‘s dad!) for a service that helps lost pets find their way home. The company uses a combination of online pet profiles and scannable ID tags that allow anyone with a mobile phone to quickly access everything there is to know about the pet, including the owners’ contact information, the pet’s allergies and medications, dietary needs, immunizations, vet insurance details and more.

For those with smartphones, the ID tags have a scannable QR code which links to the pet’s mobile-optimized online profile. For feature phone-owning rescuers, there’s a website URL as well as a 24/7 “Found Pet” hotline listed, too.

When someone finds a PetHub subscriber’s lost pet, they’re sent an email notification, and if the rescuer also scanned the QR code with their smartphone, then the owner is also sent the GPS location of that scan. (GPS info is available for PetHub’s premium Silver or Gold members.) 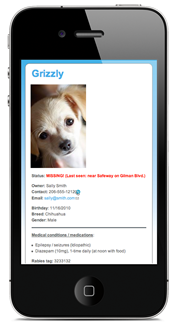 The toll-free pet hotline was added to the PetHub service back in May of this year, and has been helping to boost the startup’s customer base. In February, for example, the company had over 25,000 customers as it signed a deal with pet tag maker Red Dingo for distribution. Today, the company reports having now shipped over 50,000 tags to pet owners. (A deal with Groupon, which sold 10,000 tags over 3 days, helped too).

The startup was founded back in 2010, thanks to an idea Arnold had following a business trip. Arnold, who previously worked as a software project lead at Microsoft, had to travel overseas to India for several months and was worried about his cats, Houdini and Taz, who were being watched back home by caregivers in Seattle. Arnold then started thinking about how pet tags could be digitized and connected via mobile in new ways. (He’s not the only one thinking this we should point out: see also Dynotag, Scan My Pets Pls!, QRPetLink, to name a few.)

Today, PetHub starts at $12.95, and requires no ongoing fees to use the basic service. However, premium monthly subscriptions (Silver and Gold) offer additional features like the above-mentioned email alerts with GPS data, shelter alerts, and insurance plans.

Arnold tells me that PetHub will use the new funding to add 3 more members to its team of 7 to help with sales and marketing and will soon be reaching out to “big box” stores to introduce its products as well as offer licensing opportunities to partners.

As for PetHub’s latest investor-slash-parent, also a “Mr. Thomas Arnold,” Arnold says that dad didn’t go easy on him. The senior Arnold is a Purdue grad who has both started and sold companies in the manufacturing industry, including one which focuses green businesses.

“It does help that he knows me, the values our family shares, and that he’s been through the entrepreneur experience himself a number of times,” admits Arnold. However, he adds, “having that inside track with my dad, though, didn’t cause him to let up much as he flew out here and met with my advisors, attorneys, accountants, and our [then] 6-person team to really understand our business.” (Go dad!) Mr. Arnold (the dad) led the most recent round of $300,000 which brought PetHub’s total funding to $1.3 million.

In other news, I really miss my dog.

Below, a video that cheered me up.