Ruslan Kogan may not be a known entity in the U.S., but the Aussie entrepreneur is a pioneer of online retail in Australia and happens to be the country’s wealthiest self-made person under the age of 30. Oh, and he also founded Kogan.com, a a manufacturer and direct retailer of consumer electronics that’s projected to hit over $100 million in sales this year. But, more importantly, the guy likes to be controversial and, when things suck, he’s not afraid to say so.

Which is why Kogan announced via his blog today that his company is implementing what he believes to be “the world’s first ‘Internet Explorer 7 Tax.'” It may sound like a joke, but Kogan is totally serious. He doesn’t like IE7. Why? Because it’s the Browser of Suck. (My words, not his.)

From here on out, Kogan.com will be imposing a 6.8 percent tax on all products purchased by anyone so brash, with such appallingly low standards as to be patronizing Kogan.com by way of IE7. What he calls “the antique browser.”

But, hey, he doesn’t want to handicap users to the point where they’re liable to go the pitchforks and torches route, Kogan.com is going to make it easy for users to get around it with … a simple upgrade! Hurrah! 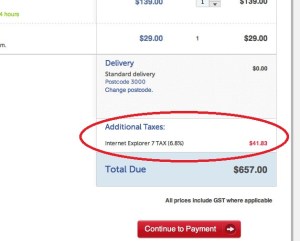 All kidding aside, the founder believes very sincerely (and I’m not sure there are more than a handful of grandmothers who would disagree) that IE7 needs to go away. Because it’s actually costing him money. In fact, he was willing to go further: “It’s not only costing us a huge amount, it’s affecting any business with an online presence, and costing the Internet economy millions.”

Kogan said that the reason his business has been able to keep its prices so low (no, he’s not in the mafia) is by using technology and the cloud to keep business processes efficient and streamlined. And when his IT team has to spend way-too-much time making the site appear normal to IE7 users, it could be spending its time improving efficiency in much more valuable, meaningful ways.

No he’s not on a crusade against Microsoft or Internet Explorer in general, he just wants people to update. Users of Chrome, Firefox, Safari, Opera and even recent versions of IE will all pass tax-free in and out of Kogan’s portal.

He concludes with this:

As Internet citizens, we all have a responsibility to make the Internet a better place. By taking these measures, we are doing our bit.

This will help us increase our efficiency, help keep prices for all smart shoppers down, and hopefully help eradicate the world of the pain in the rear that is IE7.

Now, this may just look like a play for PR (I mean who actually uses IE7), but remember it wasn’t that long ago that government agencies, healthcare institutions, and more in this country were using older iterations of IE. Be that as it may, we’ll let you work out how you feel in the Hacker News comments. Now with twice the snotty developers and condescending lawyers!