Kytephone, the mobile app that transforms Android smartphones into kid-safe devices, is officially making its public debut today. The startup had previously been in beta, following its reveal at this spring’s Y Combinator Demo Day, where founders Renat Gataullin and Martin Drashkov first detailed their company’s vision.

The idea behind Kytephone is simple. It addresses parents’ growing concerns over the access that these mobile computers (aka smartphones) offer children. Kids can surf the web, download apps, text and call anyone, snap photos and send them around to friends (or strangers) and more. But on the other hand, equipping kids with a phone is often seen as a must for reasons related to convenience and safety. That’s where Kytephone comes in. By locking down the phone, the app allows parents to give kids a smartphone for all the good reasons, without the negative consequences. 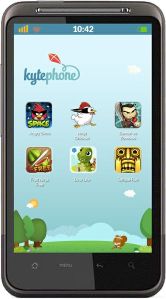 The application is built for Android because of the deep integration possibilities that the Android platform offers. Once installed and launched, the mobile app can’t be shut down by kids, even if they switch off the phone and remove the battery. The same level of control isn’t available on iPhone, unfortunately. But integration isn’t the only reason why Kytephone launched on Android, co-founder and CEO Renat Gataullin tells me, there’s also the cost. Android phones are often found at lower price points than the iPhone, so they make sense for kids’ first smartphones.

Although today, many parents are still opting to either give kids a cheap or free feature phone or just wait a few years until their child is responsible enough for their first smartphone, the world (or rather, developed markets) are rapidly moving to smartphones. Just recently, for example, a report from Nielsen found that smartphones now outnumber more basic devices in the U.S., accounting for 50.4% of all handsets.

So, yes, now is the time for a kid-friendly mobile solution. However, we should point out that the concept for parental controls and family locators like Kytephone provides are not new. Mobile carriers today offer these features as value-added services for their customers, with backends powered by companies like Location Labs, for instance. But Kytephone plans to undercut those offerings (typically around $10-$15/month) with a freemium service. Basic controls are free, while others will be premium (paid) additions.

Today, there are three key components to the Kytephone platform: location-tracking, call control (who kids can call and receive phone calls from), and application control. The latter refers to a system that allows parents to pick which apps kids can use. Apps, and more specifically games, are the primary reason kids want smartphones, explains Gataullin. “This is the main motivator as to why kids want a smartphone – it’s a big, shiny touchscreen that has lots of games,” he says. “Lots of parents don’t have issues with kids playing educational games, but they don’t want them to play aggressive or shooting games,” he adds. 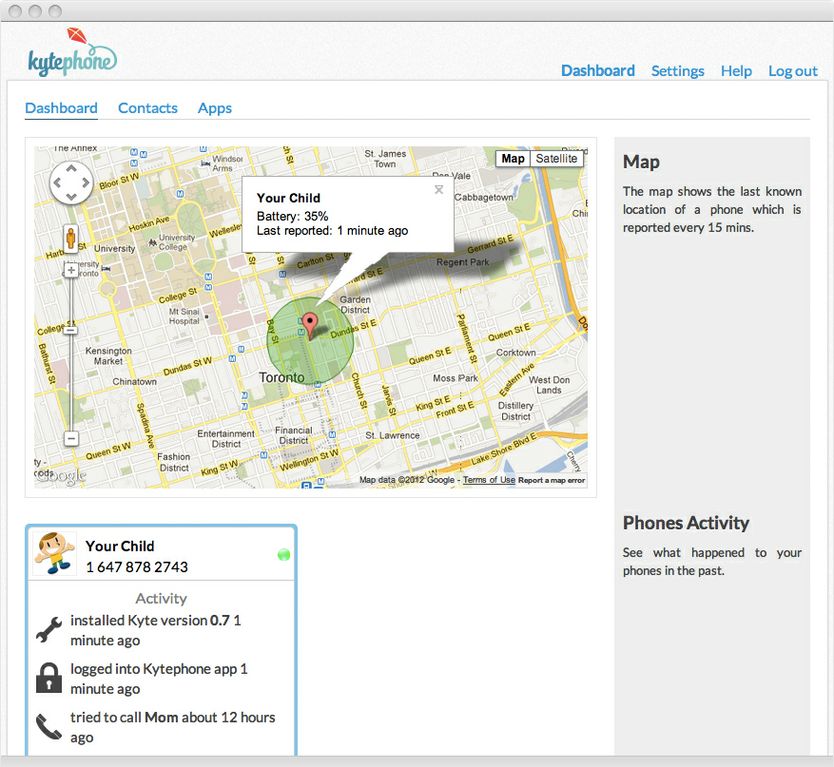 A recent update to the app added another feature – access to the camera app, where every photo snapped is uploaded to the parents’ online dashboard. This is the same dashboard where parents can configure the phone remotely or track their child’s location (pictured above).

A number of other features are in the works, too, including geo-fencing (alerts that trigger when kids leave a designated location, like school, e.g.), a whitelist for websites kids can visit using the web browser, controls for SMS text messaging, a curated kids’ app store, time limits on games (a premium feature), and additional themes for the Kytephone interface. (Apparently, some parents want to use the service for older kids too, but the current UI is too childish. Another option will let parents remove the theme altogether and just show Android’s default UI instead.)

As for parents who want to give kids iPhones, there aren’t plans to bring Kytephone to that platform at this time, mainly because of its inability to completely integrate with the iOS operating system. Kytephone currently has just under half a million in seed funding. You can download the Android app here.