Today at the LAUNCH Education Conference in Mountain View, an Israeli startup named JoyTunes showed off the work its been doing in an exciting and active space: Instrument-activated video games. Co-founder Yuval Kaminka tells us that 85 percent of the population wishes it had learned to play an instrument but never made it past those first few frustrating lessons. JoyTunes is on a mission to change that — to turn average Joes into maestros — with a series of music apps that are activated when users play their own, real musical instruments.

While it may not be the “coolest” instrument, ask any musician and they’ll tell you that learning the basics on the piano is an essential first-step. Really, it’s the foundation of Western music — learn it well, and you’ll have a better understanding of music and may just find it easier to pick up other instruments.

That’s part of the reason why the MassChallenge graduate recently launched a new, free iPad app called Piano Dust Buster, which allow users to learn and play songs at their own pace, using their own piano through the iPad’s microphone or the app’s 3D virtual keyboard. The app has a hefty collection of free songs that will help teach you the basics, like The Entertainer, La Bamba, Amazing Grace, Beethoven’s Ode To Joy, Mary’s Little Lamb, etc.

The game is mainly aimed at beginners, but is applicable to the full range of abilities. Users progress through different game levels (disguised music lessons that are designed to teach musical basics, from producing a single note to the rhythm and timing of full melodies) and can choose from a couple of different modes.

“Staff Master,” for example, helps beginners learn to read sheet music and practice sheet music notation. The app tells users when they’re playing a wrong note and what note they should be playing, and with correct notes come more points. The goal: Up the level of engagement and keep novices from giving up by correlating the motivation to learn with the desire to beat the game and level up.

Kaminka, who is himself an award-winning musician, said that the team has been getting great feedback and reviews from users, who are saying that its introductory apps have helped “tens of thousands of kids get involved in music.” Piano Dusters, for one, has a 4.5-star rating on iTunes, and the co-founder tells us that Founders Collective Managing Partner Eric Paley’s daughter (FC invested in JoyTunes) has started learning the piano because of JoyTunes. 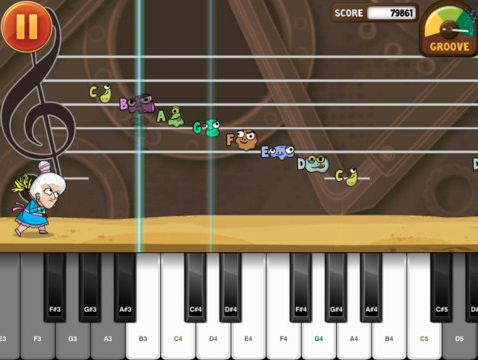 In the first month since it launched, Piano Dusters saw 100K downloads and the co-founder says that the level of engagement continues to increase: In just two months, users have collectively played over 3 million songs. It’s also reached the top five list in the music apps category in over 30 countries.

JoyTunes’ work in connecting video games to music education attracted $500K in seed funding from Founders Collective, Palantir Technologies Co-founder Joe Lonsdale, Going.com Founder and former AOL exec Roy Rodenstein, Genesis Partners, and a handful of other angels. (The startup is in the process of raising its series A now.) Kaminka was also excited to announce the addition of another notable veteran of the music video game space. Eran Egozy, the co-founder and CTO of Harmonix Music Systems — better known as the company behind Rock Band and Guitar Hero — will be joining the startup’s advisory board.

Not to get overly excited and turn this into an ad, but it’s worth noting when the United Nations gives an award to an app developer. Egozy’s joining as an advisor followed JoyTunes being given The World Summit Award by the United Nations — an award given once every two years to the most creative eContent and innovative information communications technology.

When asked about JoyTunes’ secret sauce, Kaminka told us that the key is that, while the startup’s core business is games, he doesn’t consider JoyTunes a “gaming” company per se. They just want to see music education turn into something that’s actually fun and they want to use gamified learning experiences to make that happen, both for engagement and process.

For the last three-odd years, he said, there really weren’t many apps that wanted to be about learning real music using real instruments. “But this trend is starting,” he said, and while founders don’t love competition, he sees this as an awakening that’s great for music and great for education.

There are plenty of apps out there, like Magic Piano by Smule, for example, but Kaminka still believes the App Store is still short on apps with viable connections to music (and musical instruments) that take game dynamics seriously. That being said, there are other cool options like TechCrunch Disrupt finalist Incident and its gTar, WildChords, Jammit, and a million more.

Most of these are focused (smartly) on guitar, as that’s what everyone wants to learn. But there are plenty of kids out there learning to play piano, wind instruments, strings, etc., and Kaminka wants to bring Piano Duster to all those.

For JoyTunes, the next step, the co-founder says, is to bring its apps to the iPhone and focus on social features, creating a music community, ramping up license content and adding functionality like the ability to record and share videos of your performance.

It’s great to see so much activity going on in the gamified music education space, and here’s to hoping it gets better. We all stand to benefit.