Shortly after yesterday’s Apple WWDC keynote there was plenty of chatter amongst the pundits, journalists and developers about which apps Apple had screwed over with iOS 6.

In particular is the turn-by-turn map services now baked into iOS 6, a move that removes Google Maps from the core OS altogether. Waze, which launched back in 2009, offers free crowd-sourced map data for traffic and navigation via iOS, Android and other mobile platforms.

While it wasn’t touched on during the keynote, many assumed that Waze had essentially been killed off by Apple. A jovial Robert Scoble even declared to me that Waze was “screwed” shortly after the end of the keynote.

Turns out that that’s not true.

According to the following legal notice Waze is included as a source for iOS 6 Maps, in addition to Getchee, Localeze, Urban Mapping, DMTI, MapData Sciences and, of course, TomTom. 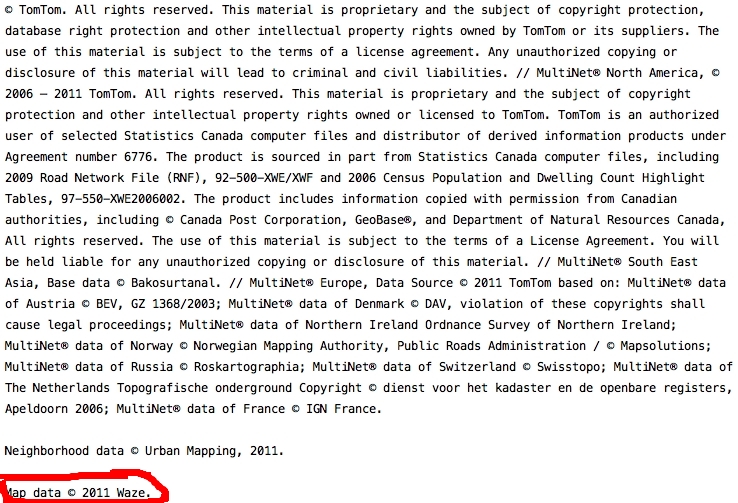 Others, like TomTom have confirmed with TechCrunch that they’re contributing data to Apple’s iOS 6 Maps.

H/T @mg and a nearly anonymous commenter on one of our posts yesterday.