When CEO Tim Cook kept saying “stay tuned” at D10 about new Apple collaborations with Facebook, he may have meant it literally. Soon you could be tuning into Facebook on Apple TV, or seeing your iTunes or iPod activity auto-shared to Facebook. Boosted revenue, better ad targeting, and trouble for mutual enemy Google are all potential benefits.

While there are plenty of smaller ways Facebook and Apple could intertwine, here’s a  look at two big developments that could grow from deeper ties between 1 Infinite Loop and 1 Hacker Way.

Note these predictions aren’t based on inside information, but I think they’re likely to flower out of Facebook sprouting inside iOS, which we hear will be announced at WWDC tomorrow.

Cook didn’t say “there’s some things in the works” or “we’re excited about partnerships with Facebook”, he repeatedly said “stay tuned”. That’s the phrase old TV shows used to convince you to keep watching through a commercial or until the next episode. That, and reports that Apple may introduce an SDK for its Apple TV app platform at WWDC this week by BGR and John Gruber, lead me to believe Facebook and Apple are working together to turn you social network into a social TV show.

Facebook’s got the world’s biggest archive of photos, with 250 million posted each day, and allows for high-resolution uploads that’d look great blown up on a big screen. Imagine the photos from your news feed turned into a slideshow on your Apple television. Or the videos shared by friends streamed back-to-back. Even simple text status updates and their comments shown full-screen could be a pleasant laid-back experience. It could update reverse chronologically in real-time so you could leave it on to always see the latest content. 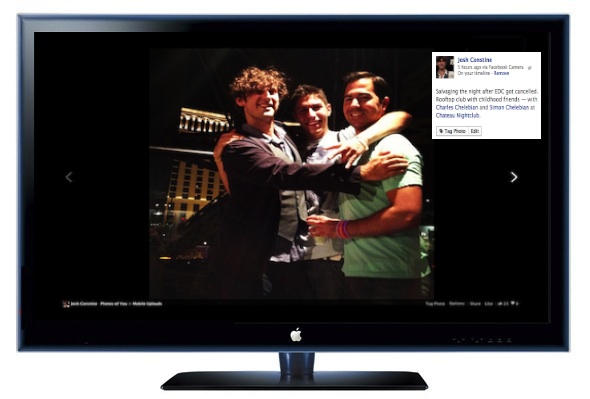 And while Facebook is struggling to make money on small mobile screens, Facebook TV could be a more natural place for display ads. Advertisers have been demanding a bigger, flashier ad formats that Facebook TV could host. We’re so used to watching commercials on TV that a glossy still ad every 10 minutes or 10 photos, or the occasional fifteen-second pre-roll might not seem out of place.

Apple would gain a good showcase for how existing mobile and web apps could be reformatted for the television. The special Facebook app could also be a selling point for Apple’s new TV hardware. Facebook needs to be on televisions and Apple needs Facebook on its televisions, so this collaboration seems inevitable if not imminent.

There’s already reports from 9to5Mac and others that Apple plans to add Like buttons to iTunes and the App Store, but what if it went a step further and made content sharing automatic?

Spotify has had huge success with Facebook Open Graph auto-sharing, because there’s no recommendation as persuasive as one from a friend. The Facebook news feed shows you a friend listened to a song, you click through, sign up, listen to the song, listen to a couple more, get tired of the ads, and start paying Spotify.

Apple could tap into the same well of virality by integrating Open Graph auto-sharing into iTunes on both the desktop and mobile. If users opted in, stories about the songs, tv shows, and movies they download, listen to, or watch could be published to the news feed, inspiring referral traffic and purchases. If you could listen to or watch previews of that content straight from the news feed, even better, but firing up a separate web page or the iTunes desktop/mobile app would be fine too.

And if Apple really wanted to boost App Store revenue, it could make app downloads trigger auto-shared stories. “Johnny downloaded Infinity Blade” you say? Well I think I will plop down a few dollars for it too. Open Graph stories about my friends using apps could also inspire reengagement with apps I already own.

This would essentially mean giving up on Ping, but Apple should swallow its pride, accept it doesn’t get social and can’t rebuild the friend graph, and start building Facebook into its content stores. Apple could then leverage Facebook’s EdgeRank news feed sorting algorithm that knows who your closest friends are — something Apple could likely never build. It would ensure the news feed stories you see would be about what your best friends were downloading, using, listening, or watching, not just the habits of distant acquaintances that you might see as spam.

Privacy controls, especially easily activated “private mode” on any source of auto-sharing would be key, but considering the rise of Open Graph music, video, and news reader apps, it seems like lots of people would be fine sharing their iTunes and App Store activity. Apple has long been conservative about privacy-related product, but it may have finally woken up the fact that social, and the privacy concerns that come with it, are no longer optional.

Apple can’t just push people into a Facebook data permissions step, though, or users could click through blindly, get surprised by what’s shared, and a backlash could ensue. iTunes + Open Graph’s opt in would have to be very clearly explained.

Facebook has much to gain from iTunes auto-sharing as well.

First it gets engaging content to fill its Ticker and news feed with. “24 friends watched The Walking Dead Season 2 Episode 1” is something I want to know about. But many people don’t realize that all this Open Graph data is structured, and it’s powering the future of Facebook ad targeting. Facebook is already letting advertisers target users who listen to Kanye West, not just those that Like him, and it could harvest huge crops of this data from iTunes. Plus I’m sure native mobile app developers would take advantage of an option to target Facebook ads to users who’ve downloaded similar apps to theirs — data the social network doesn’t have yet

Finally, this partnership around content and apps could strike a decisive blow to Google, who compete with Apple and Facebook via Android and Google+. Suddenly it would become much easier for 900 million people to discover iOS apps than Android apps, and they’d be constantly reminded of how much people use their iPhones, iPads, and MacBooks. If this all went down, Google would probably deepen the ties between Android and Google+, publishing similar stories to its own social network. The problem is few would see those stories as Google+’s time-on-site and user count is just a fraction of Facebook’s.

So Apple makes money, its app developers and content creators make money, Facebook gets content and ad targeting data, and Google gets overshadowed. Before he passed away, Steve Jobs became a mentor to Mark Zuckerberg. Soon we might see the seeds sown from that friendship blossom. 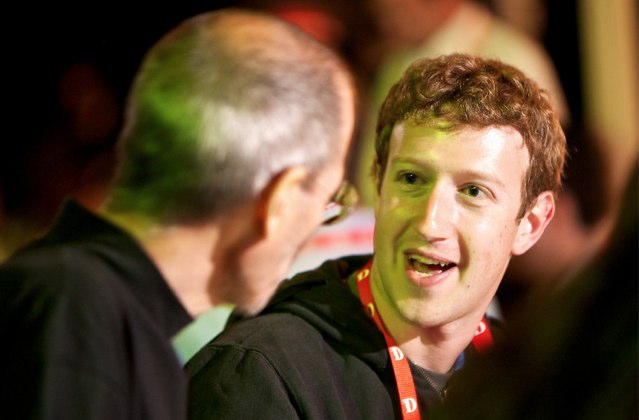