The first thing, of course, is that Mike Lazerow, the founder of Buddy Media, met me. This sounds egotistical, but everything I did in the encounter was bad for me.

He cold-emailed me in 2007. I had just launched a company called Stockpickr.com. He liked the idea and his time with GOLF.com (which he had built and sold to Time Warner for $24mm) was running out and he wanted something to do. He liked the idea of Stockpickr and wanted to run it. Specifically, his email said:

“I’m a huge fan of Stockpickr and can help grow the business to the next level. Let me know if you’d like to discuss. You currently have a great site and with a little tweaking can turn it into a category killer.”

So we met at my favorite diner on 44th street. He told me the other day he remembered what I ordered. Bacon and a vanilla milkshake. For someone born with a heart condition, as Mike was, that order must’ve stayed implanted in his memory.

He pitched a bunch of great ideas of what I should be doing at Stockpickr. I did all the ideas. They were genius. In fact, I stole them all from Mike and didn’t give him credit. That’s the way I roll. And I did become a category killer as a result. Thanks Mike!

Although he didn’t become involved with the company (I ended up selling it a few months later) we became friends and would meet regularly for breakfast. So the first great thing that happened to Buddy Media was that to my great detriment I didn’t let him run Stockpickr and he was forced to come up with an infinitely better idea, which was Buddy Media [disclosure: I invested].

[See also, “The Day Stockpickr Was Going to Go out of Business – A Story of Friendship“]

2) He saw the potential of Facebook. Not everyone did. In July, 2007 I got laughed off the set on CNBC by saying Facebook would be one be worth north of $100 billion. In September, 2007, Mike bought a technology called AceBucks, which worked similar to how Facebook Credits works now. A bunch of us put together the first round but we had no idea how this would work. The idea is that AceBucks / Buddy Media would make games and people would buy or trade virtual goods using AceBucks. Sounds like Zynga right? Come to think of it, Mark Pincus (and Peter Thiel) was also in that first round of Buddy. Perhaps hedging his bets.

3) He switched business models to survive. But Michael had gotten all these programmers together  who knew Facebook better than anyone else. What to do with them? He basically created the market – convincing companies that they needed a Facebook presence even more than they needed a corporate website because of the direct engagement with the customer. He transformed into a service business at first, helping companies one by one get onto Facebook. Building various tools and applications that businesses could use to manage that engagement with the customer. With Facebook you advertise once to get that “fan” for your brand but forever after you can market to them for free. The trick is to have the  tools to keep that engagement high so the fan continues to like you. And for that continuous engagement, companies would pay Mike’s team for his programming services. 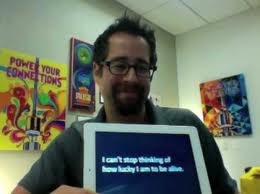 (click image to see Mike’s inspirational video, “Is Fear Holding You Back?” that he made the day of the Salesforce announcement.)

This was in 2008. When the financial crisis was happening and it became much more difficult to raise money. By transforming from a gaming/virtual currency company with unkown prospects to a service business, Michael guaranteed that the company would remain afloat. When you have a service business (I had a website development business in the 90s so knew from experience) you can stay afloat by hiring and firing as needed when clients are added or dropped.

The problem with a service business is that you are only as valuable as the people who walk out the door every night. Mike knew this so…

3) He became a software-as-a-service company. He saw that many of the services he was building for companies were the same. So he standardized them and created a platform of tools. This platform-as-a-service approach allows you to make money while you sleep. In other words, you now can command a higher valuation. Your tools and IP become valuable. They don’t walk out the door at night.

Companies can sign up, use the tools, add more games, apps, engagement tools, etc without the need for the usual overhead from a service company: project managers, programmers, workflow specialists, designers, etc. It was all done for them one time and they can just keep going.

It also created a huge moat around Buddy. Once a company signed up, they couldn’t easily switch because they were using all the tools that Buddy owned. Valuation got higher and Mike raised enough money at the right moment to stay in business forever.

4) He brought on distribution as equity partners. Many businesses take on standard VCs as investors and then fight it out for distribution. Mike brought on ad agency WPP, who had thousands of potential customers, as an equity partner. WPP’s interests were compleletly aligned with Mike’s so adding new customers never became a problem and the company continued to grow.  Every growing business should do this. It further locks in your moat and makes it easier to raise future money (VCs say “well if WPP is in then we should go in”).  In fact, VC demand was so great for Buddy at this point that when I called Mike to introduce him to a high profile VC (top 3 in the Valley) he wouldn’t take the meeting. “Too many meetings!” he said.

5) He worked beyond human capacity. One time I was thinking of starting a consulting business helping corporations develop their twitter strategies. I almost wanted to be a Buddy Media but for twitter instead of Facebook. I had customers ready to go including a major car company. I called Mike up asking for advice. He was getting off one plane and about to get on another. He was speaking at one conference on one continent and about to visit a client in another continent. I got scared. I had just met  the woman who would become my wife. I didn’t want to be flying all the time. This car company already wanted to fly me to Detroit.  I can’t remember if Mike gave advice or not on that phone call. I only remember that I was literally shaking when I heard how much he had to travel. I was too lazy! So I stopped the business. I think he loved what he was doing. But I knew I wouldn’t’ love it. It would kill me.

Let’s summarize why. Facebook just had THE MOST SUCCESSFUL IPO in history. The newspaper headlines say it was a “flop”. That’s why some people write newspaper headlines and some people make a lot of money. The pessimists write the headlines and the optimists make the money. Facebook raised the maximum amount of money they could raise at the highest price and they paid the lowest fees paid in the history of investment banking. With decision-making and execution like that it adds to a long list of successful decisions that Facebook’s management continually makes. This IPO was very successful for Facebook, which is why their stock is cheap now. But further, go back and watch the Super Bowl. For the first time, more than half the companies didn’t put up their website URLs. They put  up their Facebook URLs. Many of those Facebook pages set up by Buddy Media. Facebook (and Buddy) are here to stay.

Salesforce.com, with their thousands of companies in need of additional SaaS Services, particularly services that allows them to manage their presence on Facebook, was a natural fit for Buddy and will do well as marketing budgets switch more and more to the Facebook ecosystem. 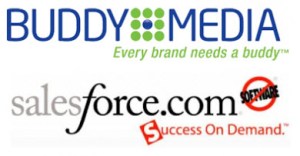 7) He sold for $800mm+. I’m not sure why the newspapers keep saying $689mm. Let’s carefully read the SEC filing together: It states that “total consideration” …”shall mean an amount equal to USD$745,000,000, plus the sum of (x) Closing Cash and (y) the Aggregate Strike Price Amount”.

So what are the “Closing Cash Now” and the “Aggregate Strike Price Amount”? We know the company has raised $90mm according to Crunchbase, with the last round closing in the latter half of last year – a total amount of about $55mm. The prior round was $30mm. Assuming they still have the $55mm in the bank leaves us with a price of $800mm. Now add in the “Aggregate Strike Price Amount” where they take care of all the issued options, many of which are significantly in the money. I don’t know what this number is. But it probably adds 10-20% to the deal price. We’ll know for sure when the deal closes. $800mm makes this the largest tech deal in NYC in over five years.

AllThingsD is reporting that Google was willing to pay more than $745mm but this $745mm is an arbitrary number. Given the tighter federal overseeing of Google acquisitions, plus the clear synergy between Buddy and Salesforce.com, plus the fact that this deal is probably closer to $850mm – $900mm in size, Google would’ve had to offer a billion or more to take the deal away from Salesforce.com.

So congratulations to Salesforce.com for finding the perfect complement to the services that they provide customers. And congratulations to Mike and team for a job well done, for riding the waves of anxiety and fear of obscurity that inevitably rise in every business. For surviving. For working hard. For selling.