It’s not often that we come across startups that focus on seniors, but according to a new report by analyst firm Forrester Research, seniors ages 65 and up are probably more connected and tech-savvy than you think. Forrester found that about 60% of U.S. seniors are online. That’s about 20 million people and while this obviously means that 40% don’t care much about the Internet, those 60% who are online are tech-savvy and happily use technology to connect to their friends and family.

Online seniors, says Forrester analyst Gina Sverdlov, also highly value their mobile phones, but mostly for making calls. Only 22% of online seniors use their phones to access the Internet and only 7% of those who are online and own a mobile phone use mobile apps on a regular basis.

So what do those seniors who are online do on the Web? Turns out, it’s not really that different from what you are doing. Just over 90%, for example, use email. 59% have purchased something online in the past three months, 49% have a Facebook account, 46% send and receive photos (mostly by email) and 44% play online games. Almost 60% of online seniors own a digital camera and 76% own printers. 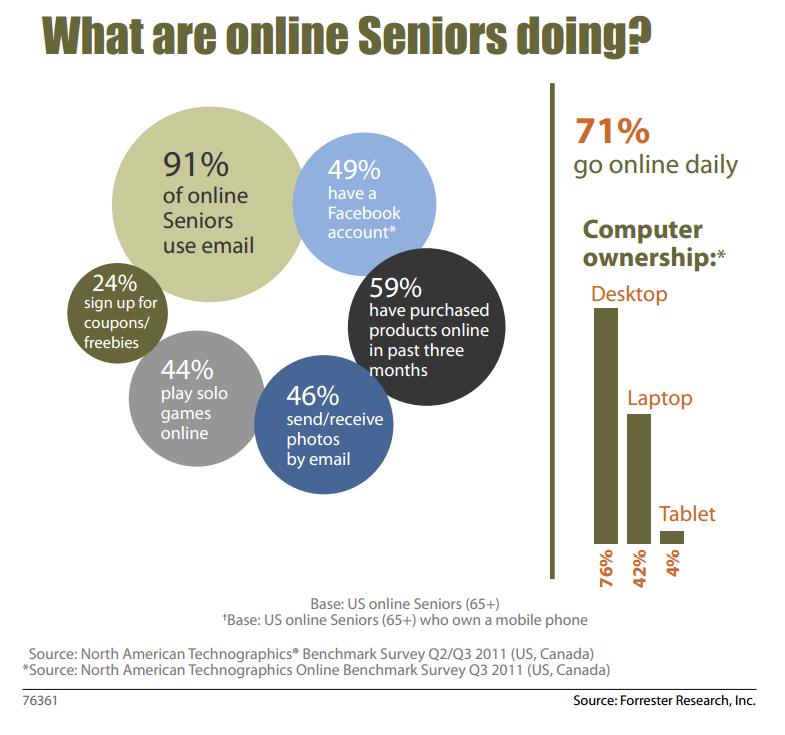 It’s pretty obvious then, that there is still a wide open market for startups that focus on making photo sharing easy for seniors, for example.

At the same time, though, it’s also worth noting that there is still a massive divide between those seniors who are online and those who decide to remain offline. Here, the demographics are similar to what we’ve long seen among the general U.S. population as well: the higher your income and the longer you went to school, the more likely you are to be online.