Sometimes you want to be out partying on a Friday night and simply can’t muster the energy. It happens. But last year at TechCrunch Disrupt San Francisco, a service launched that aimed to solve that problem, and the company ultimately won and took home the Disrupt Cup. That company is Shaker, and it’s just making its way Stateside from Israel with the forthcoming launch of Club 53 tomorrow at 7:53pm PST.

If you don’t already know how Shaker works, it’s essentially a virtual world inside a Facebook app. That may mean a beach, a sports arena, a park, or the aforementioned Club 53. But, that’s not a real club. It’s about as real as your strawberry patch in FarmVille, but that doesn’t mean it isn’t fun right?

You have an avatar (or Shaker) that performs different actions in real-time, with other avatars that are hanging out in the venue. You can buy drinks, dance, enjoy the music and socialize just like you would in a real club, except for the fact that you’ll be on your couch in front of your computer (and your chances of getting laid go way down). The launch of Club 53 marks the first public venue created by Shaker for North America, and as long as you’re 18, all you have to do is head over to Shaker’s website and sign up. Far East Movement, the same group that’s Fly Like A G6, will be “there” at launch time to celebrate, as will other bands such as Mayday Parade, Escape The Fate, and Daniel Bedingfield. BandPage is helping out with the music side of things, offering musicians a way to easily host events and share content within Club 53.

But perhaps club-hopping isn’t your thing. In that case, Shaker is preparing a sports environment in collaboration with the NBA. Starting on June 12, in line with the playoffs, Shaker will launch an NBA Playoff Finals space two hours prior to tip-off for each game, where fans can hang out and enjoy the game together, sports-bar style. There will also be trivia competitions and prizes.

I still can’t quite wrap my head around a service that wants you to have real-world experiences alone in your home, face aglow from the light from the computer screen. How am I supposed to enjoy a virtual tequila shot?

But now that the service is going live here in the U.S., maybe Shaker will prove me wrong. 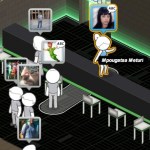 Editor’s Note: None of these photos are of Club 53. It will be unveiled tomorrow night.