While it used to fly straight ahead, Twitter’s new bird logo has its beak held high, representing a company ready to take off, not just cruise on. Bloomberg’s sources close to Twitter said the company expects to generate $1 billion in sales in 2014, almost double eMarketer’s prediction, so it’s fitting that the Twitter bird is looking skyward and has a new professional haircut. The redesigned bird replaces both the old bird as well any “T” or bubbled typeface “Twitter” logos. It will automatically be pushed to all official Twitter buttons, but sites may want to update any static Twitter logos they display.

And if you wanted to read entirely too much into the redesign, you could say the sharper, aerodynamic 3-feather design represents Twitter’s improved speed and reliability. No bloated fail whale here.

The company seems optimistic about the money it will make as it completes the roll out its self-serve ad buying interface for purchasing Promoted Tweets, Accounts, and Trends. But Twitter will have to be careful not to overrun its site and apps with ads, or engagement could take a nose dive. 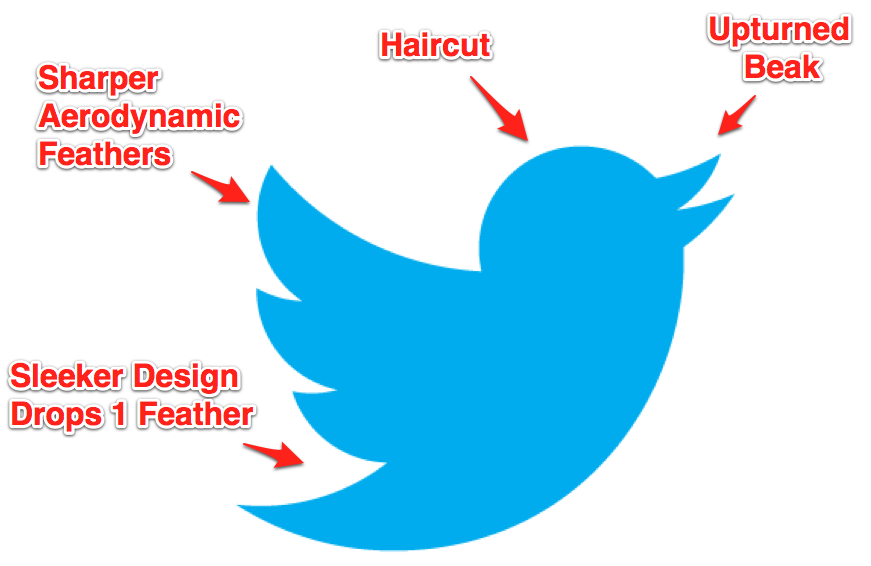 eMarketer has a more conservative estimate for Twitter’s sales growth, predicting $540 million in 2014, but that’s still more than double the forecaster’s $259.9 million expectation for 2012.

But these estimates may not take into account a strong new competitor in the interest graph space: Facebook Subscribe, which has used its massive network size and time-on-site to drive tens of thousands of followers to influencers. If receiving updates from thought leaders and celebrities in the news feed is more convenient, existing Facebook users might be less likely to start a new account on Twitter.

Twitter has plans for international expansion and promotion, though, which could make sure it doesn’t have to squeeze its current flock of 140 million active users too hard.

And one last fun fact about the design: “This bird is crafted purely from three sets of overlapping circles” says Twitter, as you can see in the video below.