Look at your Android phone! Now back at this post!

Imagine you could program your Android to text your wife when you left work. Now imagine your Android reminding you in the morning to grab your umbrella if it’s going to rain later in the day.

Now look back at your Android Phone! Now look at Microsoft! Wait, what? Microsoft?

That’s right, your favorite Redmond techno-giant is sitting on a horse. Backwards.

Microsoft is today announcing the beta release of on{X} (pronounced ‘on-ex’), a website and Android app combo that provides users with extended control of their Android phones via remote programming. The semi-geeky can hit the ground running with ready made ‘recipes,’ while the ultra-geeky can sink their teeth into a JavaScript API.

Before we dive in, the first question that needs answering is why is Microsoft releasing a product for Android? The answer to that lies in the team that developed on{X}, namely, the Israeli Information Platform and Experiences (IPE) team which specializes in signal collection on mobile devices and location-based services. While the team’s full-time gig is to enhance existing Bing experiences with geo-fencing, real-time location sharing, proximity detection and ongoing logging & recommendation systems, it also works on new approaches to UX which combine web services and applications.

Shira Weinberg, the team’s Program Manager, explained that the less strict security model of the Android platform is well suited for deploying early stage technology previews. This means that on{X} should be expected to be implemented on Windows 8 and Windows Phone, which require a more mature implementation of the technology.

All users need to do is download the Android app and then configure rules on the on{X} site. Rules are called ‘recipes’ and there are 11 templates ready to go. These include ones such as ‘Launch the music app when I am walking’ and ‘Remind me to visit the gym if I haven’t been there in 3 days’. Check out the video at the bottom of the post for a demo.

Each recipe can be easily edited by novices before being pushed to the user’s device. The rules and all the data they hold are private, and are available only to the user.

Geekier users can create brand new rules using a JavaScript API that outlines on{X}’s ‘triggers’ and ‘actions’. For example, ‘When I leave home remind me to buy milk’ (Trigger = leave home, Action = remind me to). Trigger examples include: A change in location, SMS received, incoming call, timer, low battery, etc. There’s another pretty nifty trigger called ‘mode of transport’ that allows the device to detect if the user is walking/driving/running. Actions include: Send an SMS, send an email, show a notification, launch an application.

While recipes are private by default, on{X} allows users to publish their rules as public recipes, in which case they will be reviewed prior to their release to the general public.

I dare say Microsoft just pulled an Old Spice and got cooler. 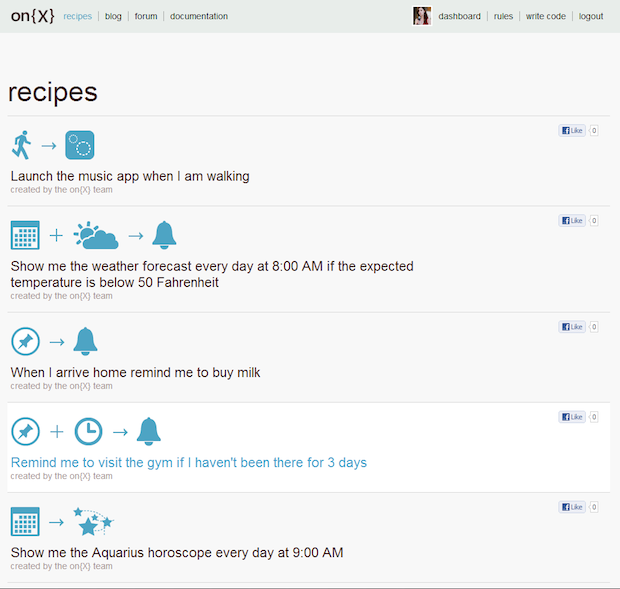